SIMFEROPOL, November 29. Crimean power has completed preparations for the launch of the energy bridge from the Krasnodar region. This was announced by the Minister of energy of RF Alexander Novak, Deputy Director of the company “Krymenergo”, the chief Manager Andrey Anokhin. 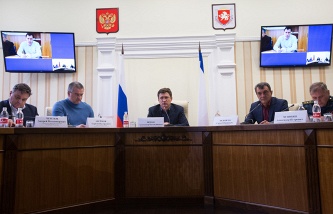 Novak: difficult situation with energy supply of the Crimea has stabilized

“Yesterday all works on preparation of Crimean side to receive power from the power bridge. The station Kamysh-Burunskaya (Kerch – approx.) translated into the new scheme,” he said.

“About this we are planning to talk about,” said Nowak, who flew in to Crimea this morning.

Minister of energy of the Russian Federation visited the Central dispatching service of “Krymenergo”, which manages the entire power system of the Crimea, talked with dispatchers.

“The system was up completely from scratch”

The chief Manager of “Krymenergo” also spoke about how the power system worked on the night of 22 November, when after the bombings of power lines in Ukraine were simultaneously deactivated all four lines, on which there was electricity to the Peninsula.

“One hundred years of the Crimean energy system that was the first time the system was up completely from scratch, synchronize a large number of stations and introduced a fully isolated mode,” – said Anokhin.

After the launch of the so-called energy bridge, which will run along the bottom of the Kerch Strait, the power system of the Crimea becomes independent from Ukraine.

In Crimea expect that the first megawatts from the mainland will begin to power the grid of the Peninsula already at the beginning of next month.

However in Sevastopol, living in the real chrezvychainoi the situation on November 22, resumed work cinemas.

The largest movie theater in town, “monsoon”, with five rooms, with November 29, the day resumed its sessions in full.

“During the week we worked when we were light on graphics, and today installed a generator,” said an employee of the cinema.
Today at 14.00 first session took place in the municipal theater “Victory” in the center of the city. This was announced by the Director GAUK “the Film Sevastopol” Dmitry Garnaga.

“Today we are launching the utility generators in three cinemas: “Victory”, “the Seafarer” and “Moscow”. Power 10, 12 and 20 KW. To connect was not so easy, but we’ll manage. Will show the same repertoire as the other cinemas. The mood in the city fighting, we will support this spirit,” said Garriga.

The Ministry of energy: self-generation of electricity in the Crimea has exceeded half needs

MOE: in Crimea there is no one completely de-energized settlement

Earlier, the press service of the government of Sevastopol issued a statement of the Governor of the city that Sevastopol continues to live a cultural life. “In cultural institutions, theaters, Cultural-information centre, still hosts performances and concerts. In Sevastopol yesterday hosted more than 50 weddings. Resumed the work of the schools, after forced hiatus, our children returning to school. This suggests that, despite the current state of emergency, life in the city continues,” said Sergey Menyailo.

The mayor stressed that despite the state of emergency in Sevastopol is planned to be held new year’s events, primarily for children Sevastopol. “Festive events, Christmas performances to be held in schools, kindergartens, orphanages, theaters and houses of culture. All institutions are installed the Christmas tree – the main attribute of New year. We must do everything necessary to give our children a holiday, in spite of temporary difficulties,” said the Governor.
Menyailo requested in the near future to provide a plan of festive events in children’s institutions of the city, as well as to organize Christmas bazaars.
Crimea was completely disconnected on the night of November 22 as a result of blasting two transmission poles coming from the Ukraine. Now the power system of the Peninsula has been isolated, used to save fan power. Social objects are connected to independent power sources.