GORKI, November 30. Prime Minister Dmitry Medvedev called diversion off Ukraine’s energy supply of the Crimea and expressed the need to expedite the construction of the power bridge.

“There can be no other political evaluations”

“The region remained without electricity as a result, in fact, energy manipulation, actions by the Ukrainian authorities. And speaking legal language, what was done is sabotage, i.e. the destruction of industrial facilities, virtually pursuing terrorist purposes”, – said Medvedev at a meeting with Deputy Prime Ministers. 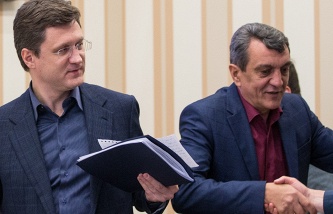 Novak: an energy bridge to Crimea may be delivered before 20 December

As noted by the head of the government, these actions have left without heat and light, inhabitants of the Crimea. “They endangered the life and health of many people, including social facilities. Therefore, there cannot be any political assessments,” said Medvedev.

He noted that already taking steps to ensure the energy supply of the Crimea. “Well, finally, what is probably the most important thing in this situation is accelerated the construction of the energy bridge across the Kerch Strait,” – said Medvedev.

The Prime Minister recalled that Crimea has always been power-hungry. The construction of the power bridge must completely eliminate the dependence of the Crimea from the supply of electricity from Ukraine. “Oh, and accordingly, should also be continued work on the introduction of new generating capacity”, – said the head of government.

The Crimean Peninsula was left without electricity supply at night on November 22. A few hours later the authorities introduced a state of emergency. The power system of the Crimea now works offline, internal generation allows to provide only half of the needs of the Peninsula. To save electricity blackouts apply consumers.