MOSCOW, November 30. The Belarusian side is not enough monitors the safety of dairy products, in particular, the content of preservatives in cheeses, according to the Rosselkhoznadzor.

“Analysis of the results of research on the safety control of products of animal origin imported from Belarus demonstrates a lack of control over the use of preservatives in cheeses”, – stated in the message Department.

In particular, the claims of the Russian service called cheeses produced at the enterprises of JSC “Rogachev milk canning plant” and JSC “Novogrudok Dairy company gifts”. 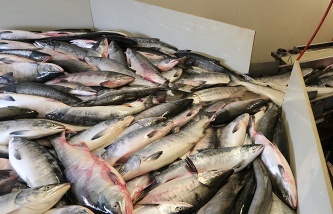 Russia may ban the import of products from 13 Belarusian companies

As reported in the Rosselkhoznadzor, during inspections, the agencies have identified double the excess mass fraction of preservative (sodium nitrate E251) in the cheese “Tilsiter” 45% fat, produced Rogachev plant, cheese and green Pesto with Basil and garlic, produced at the enterprise “Novogrudok gifts.” The office has sent to the enterprises-infringers of the regulations concerning the suspension of the declarations for the data types of cheese. Arrived to Russia batches of substandard goods seized.

The Rosselkhoznadzor repeatedly in recent times makes claims to the quality of dairy and other products supplied to Russia from Belarus. On November 20, Rosselkhoznadzor said Belarus on the need to impose restrictions on the supply of five dairy farms and eight processing facilities.

As said the Agency, at the enterprises were not actually provided should the state control over raw materials and the manufacturing of products, as well as revealed cases of falsification of veterinary documentation. In the case of ignoring of requirements of Russia on restriction of deliveries of these companies, the Rosselkhoznadzor does not exclude the imposition of more severe measures against the Belarusian providers, according to the Ministry.