Material motivation of officials it is possible if not so removed, then to be postponed for future periods, said the head of the Duma Committee on budget and taxes Andrey Makarov. 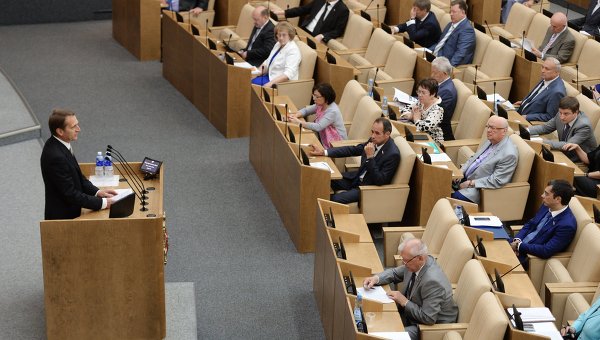 MOSCOW, 2 Dec. The head of the Duma Committee on budget and taxes Andrey Makarov said at the plenary session on Wednesday that “not one penny” of the salary does not increase neither the deputies nor the staff of the lower house of Parliament.

On Wednesday the Deputy from “Fair Russia” Dmitry Ushakov during the consideration in plenary of amendments to the draft Federal budget for 2016 carried on a separate vote a number of amendments.

“The amendments relate to earmarked funds. First, the national expenditures provided 93 billion rubles on material motivation of civil servants at the time, as pensions are indexed at 4%, the maternity capital is not indexed at all, law enforcement officers salary is not increased… We believe that the financial motivation of officials it is possible if not so removed, then postponed for future periods when more favorable situation in the economy we will develop, and the existing funds be reduced from 93 to 13 billion rubles and to direct on support of separate branches of economy”, — said Ushakov, commenting on the content of one of the amendments.

In addition, another amendment proposes to reduce the 500 million “provision of the state Duma in part the salaries of the deputies,” added the MP from CP.

“How beautiful it sounds: the author proposes to reduce the 500 million budget allocation for financial support to perform the functions of the state Duma. You remember speculation in the press, when he talked about how salary is increased to deputies, the staff of the state Duma, as some “Golden parachutes” are created. Such amendments give rise to such speculation. It’s a lie. For a single penny does not increase the salary nor the deputies, nor the apparatus of the state Duma”, — said Makarov.

The Deputy proposed to stop speculating on this topic. “Because the only thing that was done really, is on the proposal of the Chairman of the state Duma was reduced the salary of MPs by 10%, we did the first of all Federal agencies and after we did the rest”, — stressed the head of state Duma Committee.