Anticipating the visit of Lavrov to Cyprus, a spokesman for the Russian foreign Ministry Maria Zakharova recalled that Moscow “supports efforts to achieve a comprehensive just and viable solution of the Cyprus question on the basis of the relevant resolutions of the UN Security Council”. 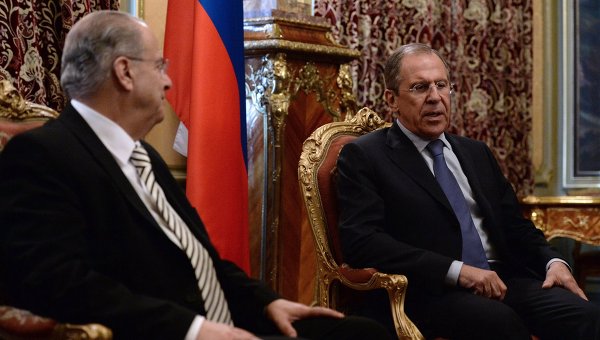 MOSCOW, 2 Dec. The Russian foreign Minister Sergei Lavrov arrived in Cyprus on Wednesday, December 2, will discuss with the government of the Republic relations between Russia and the European Union, the situation around Cyprus settlement, the Syrian crisis, as well as a number of other issues on the international agenda.

At the end of the visit to Cyprus Minister will go to Belgrade, where he will participate in the meeting of foreign Ministers of the Organization for security and cooperation in Europe (OSCE). According to the U.S. state Department, on the sidelines of the Ministerial Council, Secretary of state John Kerry plans to discuss with Lavrov the incident with the downed su-24, the Syrian settlement and the situation in Ukraine.

The program of the working visit of Sergey Lavrov to Cyprus includes talks with President Nikos Anastasiadis, head of Ministry of foreign Affairs, Ioannis Kasoulides, as well as Chairman of the house of representatives Yiannakis Omirou. Also the Russian Minister will meet with the head of the Cypriot Orthodox Church Archbishop Chrisostomos.

As noted earlier, the Russian foreign Ministry, relations between countries are developing “in an atmosphere of traditional friendship and mutual sympathy”, which was confirmed by the visit to Russia Anastasiadis in February of this year. Then the Cypriot President has invited Vladimir Putin to pay a return visit to Cyprus, and the Russian side promised to bring it “through diplomatic channels”.

Investment and financial interaction are one of the key areas of bilateral cooperation of Moscow and Nicosia. Cyprus remains one of the main channels of attraction of foreign investments into the Russian economy, taking the leading position among the countries-investors. “At the beginning of 2015 the amount of accumulated FDI from Cyprus in the Russian economy amounted to almost 200 billion USD”, — said on the eve of the Russian foreign Ministry. Up to 80% of all foreign investments in the economy of Cyprus comes from Russia.

The Russian foreign Ministry acknowledged that as a result of anti-Russian sanctions the EU and the response of Russia was followed by the decline in trade and economic cooperation between the two countries. “We are nevertheless seeking ways to balance this situation”, — underlined in the message of the foreign Ministry.

One of the topics of the talks Lavrov during his visit to Cyprus will be the Syrian settlement, including in the context of joining efforts in opposition were banned in Russia grouping “Islamic state” (in the Arabic version of DAYS, banned in Russia). Between Russia and Cyprus have signed an agreement on military cooperation. And many of its provisions were updated during the February visit of President Nikos Anastasiadis in Moscow. In particular, it was stated that the Republic of Cyprus will allow Russian courts involved in the fight against terrorists and piracy, calling at ports in the country. Then the Russian leader stressed that such cooperation between Moscow and Nicosia is not directed against anyone, and “not bothering anyone”.

Experts note that, in the light of new circumstances (in particular declarations on cooperation of Russia and France in combating terrorism) and expect new initiatives in cooperation with regional players, including Cyprus. It is not excluded that this issue will be one of the main during the talks, Lavrov and Cypriot counterpart. It is noteworthy that earlier, Cypriot media reported that a number of local human rights activists sent the President a statement in which they are asked to consider the possibility of accommodation on the island of Russian military base to protect it from IG.

Cyprus is divided with 1974 years after the armed invasion of Turkey instigated the attempt to Annex the island to Greece. Occupied was 37% of the island, which in 1983 was declared the Turkish Republic of Northern Cyprus. It is recognized only by Turkey. Since 1975, the UN Secretary-General carries out entrusted to him by the Security Council mission of good offices in Cyprus, aiming to assist the Greek and Turkish communities of the island in the interests of the contractual settlement of the Cyprus problem.

Anticipating the visit of Lavrov to Cyprus, a spokesman for the Russian foreign Ministry Maria Zakharova recalled that Moscow “supports efforts to achieve a comprehensive just and viable solution of the Cyprus question on the basis of the relevant resolutions of the UN Security Council”.

“(They) involve the creation of the island duobinary dsonline Federation with a single international legal personality, sovereignty and citizenship. As a permanent member of the UN security Council, Russia will continue to support the achievement of agreed by the Cypriot communities of a decision that should serve the interests of the whole people of Cyprus. As for the Greeks-Cypriots and Turks-Cypriots. Again emphasize that we oppose any efforts to impose on the participants of the negotiations vnutrisnih prescriptions artificial settlement or negotiation charts and so forth,” — said Zakharov.

It is in this context, she said, should consider the failure of the meeting of Sergey Lavrov with the leader of the Turkish Cypriot Mustafa Akinci, at his residence in Northern Cyprus.

“He (Akinci) insisted on holding a meeting at his residence in Northern Cyprus. Such a meeting could be interpreted as an element of official recognition by Russia of the Turkish Republic of Northern Cyprus. In our opinion, it would be detrimental to our principled position on the Cyprus settlement,” — said the representative of the Russian foreign Ministry.

Zakharova added that “the leader of the Turkish Cypriots had proposed a compromise of such meeting on the green line, which would take into account the interests of both communities of the island”, but “this option has been Mr Akinci rejected”.

After completion of the programme of visit to Cyprus Sergey Lavrov will fly to Belgrade, where he will participate in the meeting of the OSCE foreign Ministers.

The Russian foreign Ministry has not yet announced the schedule of the bilateral meetings on the sidelines of the Council of foreign Ministers. However, earlier Moscow said that the possible lack of response to requests of the Turkish side on the contacts associated with the “unwillingness” Ankara “to go to elementary apologies regarding the incident with the aircraft”.

In this case, the U.S. state Department not only said about a possible meeting between John Kerry and Sergey Lavrov, but also said that the Secretary of state intends to discuss with his Russian counterpart the incident with the downed su-24, the Syrian settlement and the situation in Ukraine.