At present, domestic cucumbers and tomatoes are more popular than the imported ones, according to representatives of the Novosibirsk large greenhouse complexes. They note that, in General, will benefit from the ban on the import of vegetables from Turkey. 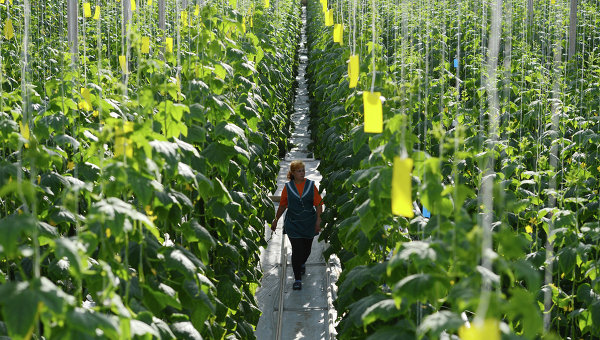 NOVOSIBIRSK, 2 Dec. Representatives of the largest greenhouse complexes in Novosibirsk believe that as a whole will benefit from the ban on the import of vegetables from Turkey, noting that at present, domestic cucumbers and tomatoes are more popular than the imported ones.

Russia from January 1, 2016, prohibits the importation from Turkey a number of products; including parts of carcasses and offal of chickens and turkeys, fresh and refrigerated tomatoes, onions and shallots, cauliflower and cabbage, broccoli, cucumbers and gherkins, fresh and dried oranges and tangerines, grapes, apples, pears, apricots, peaches and nectarines, plums and sloes, strawberries. Relations of Russia and Turkey are in crisis after November 24, Turkish F-16 shot down in Syria, the Russian bomber su-24.

“You know, really that Turkish tomatoes are now on the market in considerable quantities. Now this will not be very good for us as for Russian manufacturers”, — said the Deputy Director of the greenhouse complex “Novosibirsk” Elena Polyakova, not excluding that of its own tomato production complex will therefore increase.

The interviewee of the Agency believes that a ban on imports of vegetables from Turkey will positively affect the sales of the company. According to her, the plant annually produces more than 12 thousand tons of cucumbers and more than 1.5 thousand tons of tomatoes that are shipped across Siberia from Ekaterinburg to Yakutia.

In turn, commercial Director of trade and manufacturing of agricultural complex “Gardens of giant” Alexander Mikhailov admitted that in the Siberian regions were imported quite a large number of Turkish vegetables and fruit, but their quality compared to a private facility was lower.

“We are a Turkish tomatoes are usually not bought, because the quality of our tomatoes, which we grow in greenhouses are much higher. Therefore here the negative effect will be. Yes, there are a number of positions that will fall is zucchini, eggplant, but will look in other countries, Moroccan, Iranian, Chinese,” — said the Agency interlocutor.

Mikhailov noted that the plans to increase the production of its own products, the company has, however they are little dependent on the supply of vegetables from Turkey. “Our tomatoes as demand and you will be using. Special increase we do not foresee, because to increase the volume of the greenhouse is not so easy and not so fast. You need to construct new greenhouses, what are we doing next year,” she said.