MOSCOW, December 3. The message to the Federal Assembly, President Vladimir Putin gave his assessment of the situation in the economy, has identified five key areas for further development, and pointed to the need for further support of free enterprise in Russia.

The situation is complicated, but not critical

Assessing the situation in the Russian economy, Putin pointed to positive trends: stabilization of national currency, reduction of capital outflow in comparison with 2014 the signs of easing of inflation. 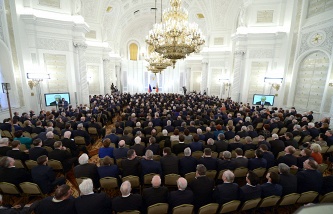 Putin: Russia is a strong state, which will definitely succeed

However, the President of the Russian Federation recognized the serious economic challenges associated with declining oil prices and limited access of Russian companies to global financial markets.

“The situation is really complicated, but I’ve said that, I want to repeat – not critical”, – said Putin.

The head of Russia called unacceptable the position based on expectations, “that now everything will miraculously change”.

“We must be prepared for the fact that the period of low prices for raw materials, and, possibly, external constraints, can be delayed, and take a long time. Without changing anything, we simply will drive our reserves, and the growth rate of the economy will oscillate somewhere at zero,” – said the Russian leader.

Putin stressed that Russia is obliged to take a place among the leaders of the world market, and pointed out five key areas for further development.

State revenues should not go, that is, by cash. Because of “grey” schemes at payment of customs duties, excise taxes on alcohol, tobacco and petrol, oil and lubricants budget annually loses hundreds of billions of rubles. This is direct theft.

The extension of freedom – the answer to all the restrictions

Addressing with the message to the Federal Assembly, Putin called free enterprise key to development.

In this regard, the President demanded from the government to submit proposals on reducing state control in the business environment, and also drew attention to excessive activity of law enforcement bodies.

Speaking on the implementation of announced in 2014 Amnesty in Russia, Putin noted that the business does not hurry to take advantage of this opportunity. The President instructed to extend the Amnesty for six months, and the procedure be simplified and made more attractive for entrepreneurs.

Support only for competitive

In order to further support the projects of import substitution, Putin has proposed to capitalize the Fund of development of the industry by a further 20 billion rubles in 2016. In addition, the head of the Russian Federation guaranteed demand and stability conditions for the investors investing in such projects.

Offered under such contracts to provide regions the right to reduce to zero the tax rate on profits. Some managers directly asked about it, to enable investors to cover their capital costs on creation of new productions

However, the Russian leader noted that the products should be of the highest international level. “Russia needs companies that are not only able to provide the country with quality products, but also to conquer world markets”, – said Putin.

According to the President of the Russian Federation, it is necessary to set the task at the national level by 2020 to meet domestic market with domestic food.

Putin also noted that resources should be focused on supporting, primarily, those farms that are highly efficient.

According to the head of state, Russia could become the world’s largest provider of organic food. To stimulate further growth in agriculture Putin has proposed to eliminate unused agricultural land.

The President also asked the government to establish a special project office for support of major projects, such as the creation of the major Russian operators in the field of Internet trading.

“One of the projects could be the creation of large private Russian companies in the field of e-Commerce that Russian goods were exported via the Internet to all countries of the world. We have something to bet,” he said.

Putin also mentioned other measures to upgrade the Russian economy, including the promotion of investment potential of domestic savings and the development of innovative technologies.