WASHINGTON, December 3. /Corr. Andrew Shitov/. The Washington-based magazine Foreign Policy (FP) has included Russian President Vladimir Putin in the ranking of “leading one hundred global thinkers” by the end of the year. 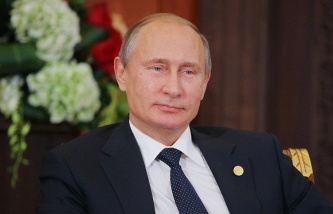 The Russian leader was in the list in the category of “those who make decisions” (decision makers), i.e. the world’s politicians. Joining him in this list were four female German Chancellor, the President of Mauritius, Prime Minister of Bangladesh and Minister of foreign Affairs of Sweden, two men – the Minister of defense of Saudi Arabia and the former Minister of Finance of Greece, two international groups – the American – Iranian and Cuban American who worked throughout the year on important for the parties to the agreements.

The choice of Putin’s Foreign Policy linked to the beginning of the operation HQs of the Russian Federation in Syria and the new rise of the President’s popularity in Russia. But the nomination made in a critical review rather than in a congratulatory manner. Its title – “the role of a peacemaker, which is expressed in the bombing”.

In addition to the political section, a new ranking of the Washington edition includes eight categories: “received the call” (among them, in particular, who died in Palmyra archaeologist Khaled Asaad and Deputy interior Minister of Ukraine Eka Zguladze-Glucksmann); “Innovators” (a few Americans and a couple of Danes, who invented the smartphone application “Be my eyes”); “Lawyers” (a dozen laureates from around the world, from the traditional defenders to the British philosopher, who had warned about the threat of enslavement of humans by computers), “Artists” (nominees from 14 different countries including a pair “of cinematographers-dissidents” from Kazakhstan), “Healers” (half a dozen U.S. medical innovators and epidemiologist from Nigeria fighting Ebola), “the Keepers” (a dozen fighters for a cleaner environment plus Pope Francis – “For the preaching of faith in science”); “Chroniclers” (half a dozen journalists and activists – volunteers from different countries, including Khadija Ismailova from Azerbaijan); “movers and Shakers” (leaders of socially responsible business – five American women and Indian from Google).

Just a list of 125 people (including group nominations). Emphasized that women slightly more than men.

A rating of “global thinkers” FP is the seventh year in a row. This is one of the “branded” products (along with an index of “failed States”), by which edition attracts more attention. Other winners in the past have included the current President Barack Obama.