Author robot astronaut Kirobo Tomotaka Thecase opened in Tokyo International robot exhibition iREX-2015 stated that the combination of the phone and the robot – “the next revolution in the evolution of smartphones”. 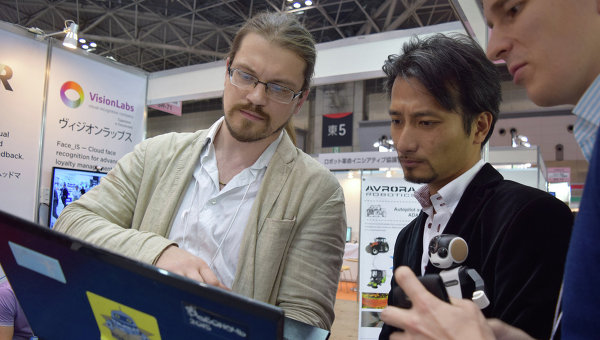 TOKYO, 2 Dec. Ksenia Naka. The next evolution of the smartphone is a phone and a robot are combined together, said one of the most famous designers of robotics in Japan, the author of the famous robot astronaut Kirobo Tomotaka, presented at the Tokyo International robot exhibition iREX-2015 his new creation “Robopon” (RoBoHon).

Huge halls of the exhibition complex Tokyo Big sight for four days it suffered the invasion of robots of different destinations and species. But despite the abundance of exhibits at the stand representing the “Robopon” (RoBoHon) — a new model of phone, or telepanorama, all the time crowded with visitors. “Robopon” is a tiny little man the size of a normal cell phone. He knows how to walk, talk and even dance. But actually it is a telephone.

According to Takahashi, this is the only promising form for the new generation of smartphones, as attempts to transform phones into watches or glasses tangible results are not brought.

“Now all using smartphones. But the level of sales keeps falling down and everybody’s looking for a new form. For example, glasses or watch. But neither that, nor another does not enjoy much success. The smartphone has been successful due to the touch pad and motion sensor. There were hopes that the voice recognition is successful, but they were not justified, these have little use,” said Takahashi in an interview with RIA Novosti

He believes that the reason lies in the shape of the phone, at the same time, the voice recognition and the ability to communicate, in his opinion, the only chance of smartphones for a long life and evolution.

“We can’t talk to a rectangular object, we are shy. There is a psychological barrier. But if the subject similar to the person that you can talk to him. The more you communicate — the more you get information. So I came to the conclusion that this form of smartphone — is a man. And like any humanoid phone,” says the developer.

“Robopon” — a partner, companion. He can keep the conversation, to remind about an upcoming event, to find a suitable restaurant, and at the same time, it’s just a phone. His back is the screen of the smartphone, with all the usual functions. But unlike the phone, “Robopon” “animates” the simplest functions. For example, as on the phone, “Robopon” you can take picture: the camera in his forehead. But at the request of the owner, he can project the pictures on the wall or Desk. While still tell when it was taken and where.

Takahashi believes that the combination of robots and phones will be the breakthrough for robots, entering them in the daily everyday life of man.

“Functionally “Robopon” very close to the smartphone. And plus he moves like a robot, and is able to communicate. Otherwise, robots are difficult to manage in everyday life. It’s too new. Where to buy robot? How to use it? How much need to pay?— we don’t know. But to buy a robot as a phone, in the store provider and to pay for the phone is simple. To carry it with you, as we carry the phone, and get used to the use of robots in everyday life,” says Takahashi.

Since the second half of the new year “robotany” will go on sale in Japan. The price and the developer, and Sharp, providing all of the stuffing telephone man, has not yet been called, referring to the fact that now I am learning the market. We only know that it will be “inevitably more expensive than regular cell phones,” said Takahashi, but, according to the representative of Sharp, “we must try to get cheaper than existing robots”.