MOSCOW, December 3. /Corr. Tatiana Vinogradova/. Prohibition of employment of workers in Russia out of Turkey will not affect employers from the list to be approved by the government of the Russian Federation and labour migrants from Turkey who are legally employed in the territory of the Russian Federation as at 31 December 2015. This was announced by the Minister of labour and social protection RF Maxim Topilin. 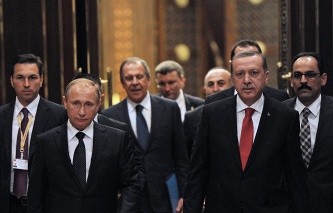 “From January 1, 2016 ban on the recruitment of workers from Turkey, but there are two exceptions. The first is a list of employers that will be approved by the government. Such employers will have the right to attract specialists from Turkey”, – said the head of Ministry of Russia.

“Second exception: employers are not included in the government-approved list will remain the right to enter into, renew, extend the term of the employment or civil agreements with the Turkish citizens who work legally in Russia as at 31 December 2015. But such employers will not be able to hire new workers from Turkey,” – said Topilin.

The President of Russia Vladimir Putin on November 28 signed a decree “On measures for safeguarding national security of the Russian Federation and the protection of citizens from criminal and other unlawful acts and on application of special economic measures against the Turkish Republic.” In accordance with the decree, a ban or restriction on the import into Russia of certain types of Turkish goods, the activities under the jurisdiction of the Turkish organizations, as of 1 January 2016 is prohibited to hire for certain jobs of Turkish citizens.