The President of Russia Vladimir Putin addressing with the annual message to the Federal Assembly. The head of state sets out his vision of the main directions of development of the country as for the next year and in the future. The current President’s address to Parliament – 22nd in the latest Russian history and 12th for Putin.

11.55 GMT the Message to the Federal Assembly is one of the main events of the presidential year. In 2015 to work in the Grand Kremlin Palace were accredited more than 500 journalists, including foreign reporters – from Turkey, China, Europe, USA and other.

The President’s speech broadcast live on television and radio.

12.00 Moscow time the Russian President began the address to the Federal Assembly with a minute of silence.

11.45 GMT the duty of the President to read out the message, which assesses the state of Affairs in the country and main directions of internal and foreign policy, defined by the Constitution of the Russian Federation. 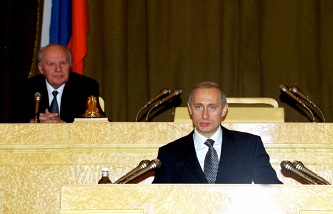 “What Russia we build”: the first message of Vladimir Putin to the Federal Assembly

According to tradition, the event will start at noon Moscow time in Georgievsk to a hall of the Grand Kremlin Palace. On delivering the message of the invited parliamentarians from the state Duma and the Federation Council, members of government, presidents of constitutional and Supreme courts, the Prosecutor General, the head of the Central electoral Committee, audit chamber and the Public chamber, heads of regions, other high-ranking officials, heads of major denominations and representatives of the media.