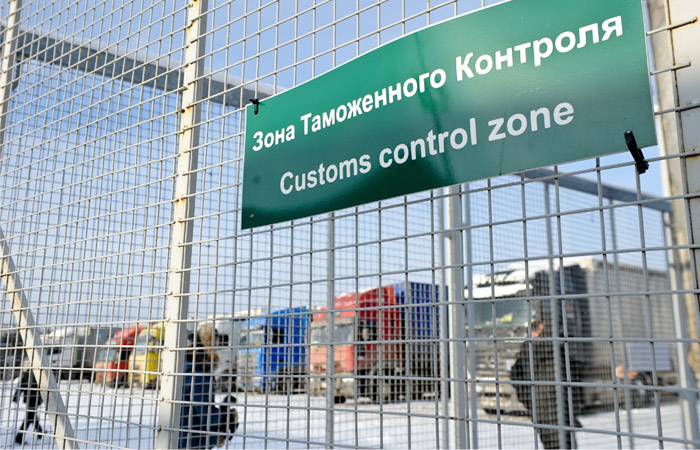 Moscow. December 2. Turkish cargo stuck at Russian customs checkpoints after the incident with the downed su-24 still not able to overcome them, despite the RF government resolution prohibiting (deferred until January 1) import only certain types of food.

Turkish trucks are not allowed across the border without explanation, the rest of the truck passing, but only to places of customs clearance, where they become queued on an in-depth inspection, said a source in one of the companies – representatives of the customs, which is engaged in the import of goods, including those of Turkish origin.

Turkish food and goods collected at customs, confirmed another source familiar with the situation.

The customs authorities of the Russian Federation from November 25, the day after Turkish air force shot down a Russian bomber, switched to the full screening of cargo arriving from Turkey, reported representatives of several logistics companies. The FCS of this information is not commented.

“Until today (December 2), we have not had even a single release of goods for free circulation”, – said a source in the company-importer. According to him, 100%-nomu to inspection, taking samples and specimens of goods for examination continue to be subjected to all the goods are of Turkish origin. All the warehouses to which machines come to be clogged, the customs officers had already physically not possible to conduct the inspection, according to the interlocutor of the Agency.

The minimum period of the examination according to the legislation is 10 days. “It turns out that any Turkish goods at least 10 days stuck at the customs,” said the source.

Turkish Prime Minister Ahmet Davutoglu said Tuesday that Turkey will take measures for the return of vegetables and fruits from the Russian customs points, “until they rot”. The Ministry of Finance of Georgia on Wednesday announced that the Russian side has not let in 38 Turkish trucks transiting in Russia.

Russia from January 1, will limit the import of Turkish food, mostly vegetables and fruits. In the list of prohibited goods were tomatoes, cucumbers, onions, cauliflower and broccoli, oranges, tangerines, grapes, apples, pears, apricots, peaches, nectarines, plums, sloes, strawberries, and strawberry. Under the ban also got frozen chickens and turkeys, salt and cloves. For a number of major categories Turkish food import – lemons, fish, nuts, salad, predamage will not apply.

The government decree came into force on Tuesday evening. “All necessary instructions and documents are timely communicated to departments, customs offices and direct performers”, – said the official representative of the FCS Alexander Smelyakov.

The Association of retail companies (ACORT) welcomed the postponement of the ban on Turkish products until 1 January. “Trading companies need immediate assistance FCS and Rosselkhoznadzor in getting prompt and delivery without “technical problems” to the end user pre-paid goods which are the property of the Russian trading companies,” said the HSE.

“Eliminating unreasonable barriers to individual access to the domestic market and administrative red tape in respect of previously procured products or products of new suppliers is essential to prevent deficits and curb price hike in the new year period”, – reads the statement of the HSE.

The components are not going

Big article in Russian imports from Turkey – parts for assembled in Russia vehicles (and vehicles too). According to a source in the automotive industry, “supply going, if just before the customs clearance took one day, now up to four”. “The problem is at all, the only difference is in scale,” – said the Agency interlocutor, noting that the company work with government agencies to exclude components from the list of products requiring more thorough examination, and prevent the extension of the embargo on them.

In the Russian division of Japanese automaker Nissan announced that the company considers the risks of possible disruptions of supplies of auto components from Turkey as minimal. “We are actively working with all involved government agencies on this issue”, – said the representative of the company.

The representative of Sollers said that the situation with supplies from Turkey have not changed yet. The company imports from this country of small range for the production of SUV UAZ, in particular, seals for glasses. “Regular delivery schedule we have, they are made to order, therefore, to assess the presence of delays difficult,” he said, Recalling also that these details are always purchased at a few months in advance, so currently, the stock has until Feb. “If necessary we will be able to find alternative suppliers, including Russian ones,” he previously said.