MOSCOW, December 3. Significant violations in the activities of “Kogalymavia”, whose plane crashed October 31 in the Northern Sinai, following the results of checks are not found. This was reported to journalists by the Deputy head of the Federal Agency for transport supervision Vladimir Chertok. 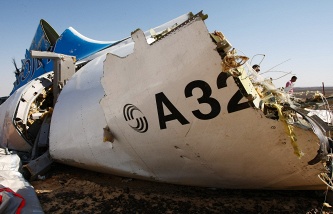 Russian A321 disaster: a month after the attack

“There are various violations that are eliminated, do not directly affect flight safety or requires you to resolve within a certain period. If it’s a violation of some kind of significant, Yes, this could lead to the revocation of a certificate of the company, such violations are not detected. There are procedural violations – no documents of any someone neochen, they will be eliminated in accordance with the act. Until now only act,” he said.

Revocation of a certificate until the question

To the question whether revocation of the operating certificate of the airline, he said, “While not talking about it. Now there (in the report) simply the fact of violations. We are obliged to investigate the inspectors find out in the course of the investigation who was guilty and for him to apply measures of compulsion or sanctions.” According to him in Rostransnadzor understand that on Board the aircraft was an explosive device. “The final conclusion will be made by the Commission for the investigation of the crash, which is headed by Egyptian authorities, and the Russian Federation is one of the members of this Commission,” he said.

January 24, 2010, at the airport Mashhad (Iran) passenger aircraft Tu-154M (registration number RA-85787), owned by Kolavia (Metrojet former name, it “Kogalymavia”) during landing in difficult weather conditions, he gets into gear, in the process of braking there was separation of the tail fin. The victims were not, 40 people were injured. The liner carried out flight from Isfahan to Mashhad by order of Iranian airlines Taban Air.

“Kogalymavia” will get insurance for the liner A321

Source: Federal Agency for transport supervision have not revealed any violations while checking the third A321 “Kogalymavia”

Source: two aircraft A321 “Kogalymavia” put into operation after inspection

April 27, 2010 at the Domodedovo airport Kolavia Airbus A320, 9819 EN route flight from Moscow to Hurghada (Egypt), returned to the airport after making an emergency landing. Victims and victims were not.

January 1, 2011 a passenger plane Tu-154B-2 (registration number RA-85588) Kolavia, carrying out flight 348 from Surgut to Moscow, caught fire while taxiing at Surgut airport. Was evacuated 134 passengers and crew members, during the state of emergency three persons were lost, 40 got wounds. The liner is completely burned.

31 October 2015 passenger aircraft Airbus A321-231 (registration number EI-ETJ) Metrojet, EN route flight 9268 from Sharm El-Sheikh (Egypt) to St. Petersburg, disappeared from radar in the area of the Sinai Peninsula. On Board were 224 people – 217 passengers and seven crew members. The aircraft was manufactured in 1997, at the time of this flight he was 18 years and 6 months. Soon, Egyptian media reported about the discovery of the wreckage of an airliner.