BELGRADE, December 3. Moscow is ready to continue the dialogue with the EU on migration, but on the basis of reciprocity. 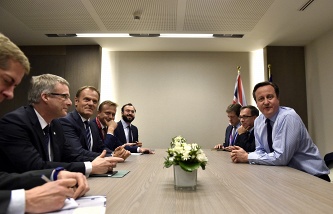 The EU has promised Turkey €3 billion, but have not received any guarantees to reduce migration

This was stated by Russian foreign Minister Sergei Lavrov.
“The threat of terrorism covers a range of issues that until recently were not visible, but they are starting to really influence the situation in Europe – Lavrov said. Is, in particular, the problem of illegal migration”.

“Here also was a serious conversation. We assume that within the OSCE it is possible to develop General principles, General approaches, which will be based on international humanitarian law, its norms and principles and that will determine the actions of all countries”, – said the head of depodesta.

“It is clear that this is primarily a problem of EU countries, because that’s where the basic stream of migrants goes. We are ready on this subject with the EU to cooperate,” said Lavrov.
He noted that “among the many sectoral dialogues that Brussels has frozen the relations with Russia, the migration dialog does not appear”. “Our partners from the EU interested in preserving it. We are also ready for this, but on the basis of reciprocity and the General context of our relations with the EU”, – said the Minister.

Lavrov said that the OSCE Ministerial Council held an important conference about the need to defer disputes to terrorism and said that by the end of the discussions a document was being prepared.

“The conversation confirmed the need to lay aside everything that does not concern counter-terrorism is now the main enemy to us all – especially those things that interfere with this fight, he said. – We are close to finalizing a document that this position of members of the OSCE at the Ministerial level will state clearly, we hope, and unambiguous”.

The OSCE institutions often went beyond the powers

The office for democratic institutions and human rights (ODIHR) and the OSCE Office on freedom of the media OSCE is often beyond the scope of authority, can easily be manipulated, stressed the Russian Minister.

“Mechanisms and OSCE institutions were established – the so-called ODIHR and the Office on freedom of the media, which was just proclaimed, but had its intergovernmental framework and now rest on the basis that they were a thing in itself, – said Lavrov. – They grossly exceed the limits of their powers and become a problem for all of us.”

The fetish for sterile discussions

The office for democratic institutions and human rights (ODIHR) and the OSCE Office on freedom of the media OSCE is often beyond the scope of authority, can easily be manipulated, said Lavrov.

“We have repeatedly offered to enter into a Treaty on European security, where the principle of its indivisibility will be translated into practical structures, – he reminded. Our Western partners refused it”.
The Minister stated fascination at the stage of formation of the OSCE as an Organization in the 90-ies “mechanisms at the expense of quality structures that would address the main problems in the sphere of security”

“Mechanisms and OSCE institutions were established – the so-called ODIHR, Office of the representative on freedom of the media, other structures that are simply declared, but not had its intergovernmental framework on which to build their activities, – said the head of the Russian foreign Ministry. And now we also run into the fact that these institutions became a thing in itself, can easily be manipulated.

They are very rude and often go beyond their authority, not appeal to intergovernmental bodies – the Meeting of Ministers, the OSCE Permanent Council and become a problem for all of us.”
In particular, drew attention Lavrov, “in one country to send 10 election observers, another 1.5 thousand, in the third don’t want to send 300, and 600 want, refuse to cooperate with the government concerned”. “Or when the Office on freedom of the media criticizes some relatively harmless things, and when journalists are forbidden to work in their profession, get off a silence or light reprimand”, – stated the Minister of foreign Affairs of the Russian Federation.

“All this prevents to work, but our Western partners, at least some of them make a fetish of these structures, trying to pull all the work of the OSCE in the direction of endless and fruitless discussions on the humanitarian aspects – human rights, minority rights – not only national, – said Lavrov. – The problem of statelessness they go, preferring to focus on the rights of human rights defenders, LGBT people and other population groups”. “Although you should follow the Conventions, according to which any discrimination on any grounds should not be”, – stressed the Russian Minister.

Foreign Minister of the Russian Federation and Italy Sergey Lavrov and Paolo Gentiloni discussed on the sidelines of the OSCE Ministerial Council in Belgrade the situation in Syria. This was reported in the Russian depodesta.

“The foreign Ministers of the two countries exchanged views on key international problems, including the situation in Syria, as well as the most topical issues of Russian-Italian relations”, – have informed in the Ministry.