His 12th annual address to the Federal Assembly, President Vladimir Putin thanked the Russian soldiers who are fighting international terrorism. He asked those present to honor the memory of the fallen soldiers who gave their lives in the line of duty, the memory of all Russian citizens killed by terrorists, a moment of silence.

On the suppression of terrorism and the unity of Russians

You need to put aside all disputes and differences, to create one powerful fist of a United anti-terrorist front, which will act on the basis of international law and under the auspices of the United Nations… Any criminal, bloody business with terrorists

Get another quote, totally unexpected even for me, the words that said the man, far from politics. These are the words of Dmitry Ivanovich Mendeleev, which were said 100 years ago. Here they are: “Separate us will destroy. Our strength is in our unity, in the army, benevolent nepotism, multiplying the gains of the people, and in the natural growth of our inner wealth and peace.” Remarkable words, addressed directly to us today

Before we got up fundamental, fateful choice of ways of further development. And this is another milestone we have passed in 2014, when the reunification of Crimea and Sevastopol with Russia. Russia loudly declared itself as a strong, independent state with a thousand-year history and great traditions, as a nation, which is consolidated by common values and common goals

On the situation in the middle East

Know who wanted to dismiss any of the regimes that brutally enforce their own rules. What’s the result? Made the mess, ruined the statehood, people, bleed, and then just, as we say in Russia, washed his hands, opening the way to radicals, extremists and terrorists

Incident Sum on the Turkish-Syrian border

We are not going and won’t rattle the saber. But if someone thinks that, having committed a despicable war crime, the killing of our people, they will get off with a tomato or some limitations in construction and other industries, they are deeply mistaken

Only, perhaps, Allah knows why they did it. And, apparently, Allah decided to punish the ruling clique in Turkey, depriving her of reason and sanity

On friendship with Turks

Meanwhile the Turkish people – good, hardworking and talented. In Turkey we have a lot of old and reliable friends

Domestic politics and the forthcoming elections in the state Duma

And, addressing the party leaders and future participants of the election process, to all public-political forces, would like to quote the eminent historian Nikolay Mikhailovich Karamzin. Here’s what he wrote: “Who doesn’t respect himself, no doubt, and others will not be respected. Not saying that love of country should blind us and assure that we are all and all better. But Russian should know the value of their”

Corruption as obstacle to development of Russia

On the situation in the Russian economy

Russia has no right to be vulnerable

I know that many people are now uneasy. The economic difficulties affect the income and overall standard of living of our people. And understand that people are wondering when we will overcome the difficulties and what are we going to do?
…The situation is really complicated, but I’ve said that, I want to repeat – not critical

We must be prepared for the fact that the period of low prices for raw materials, and, possibly, external constraints, can be delayed, and take a long time. Without changing anything, we simply will drive our reserves, and the growth rate of the economy will oscillate somewhere at the zero mark

State revenues should not go, that is, by cash. Because of “grey” schemes at payment of customs duties, excise taxes on alcohol, tobacco and petrol, oil and lubricants budget annually loses hundreds of billions of rubles. This is a direct theft

About the conditions for business

Polls show that entrepreneurs do not see qualitative shifts in the activities of controlling and supervising agencies. All orders on this account for a long time and not once have been given. How much are we talking about this, all downsized and are reducing these powers. Somewhere reduce, they can grow again. An army of inspectors remains an obstacle to work bona fide business

The role of law enforcement, the judicial system is to protect the economy and citizens from fraud and criminals and to protect the rights, property, dignity of all who obey the law, conducts its business honestly

People do not have to suffer, you need to ensure the smooth financing of high-tech medical assistance, including, yet been made the decision, directly from the Federal budget

Next year expires the maternity capital programme. She has covered more than six and a half million Russian families, including in Crimea, and in Sevastopol. But we understand that all our efforts are not yet enough to heal the wound of the past demographic

About school education and the future of the country

For a good education is not enough only presenting buildings. Need a professional, motivated to work as a teacher, breakthrough new training technologies and, of course, opportunities for creativity, sport, further education. And of course, you need to take all the best that was in the former palaces of pioneers, clubs of young technicians, and so on

In short, the Russian school and professional education, support of children’s creativity you want to configure for the future of the country… They, the boys, faces more challenges, and they must be ready to become the first, become not only successful in the profession, but simply decent people with a strong spiritual and moral support 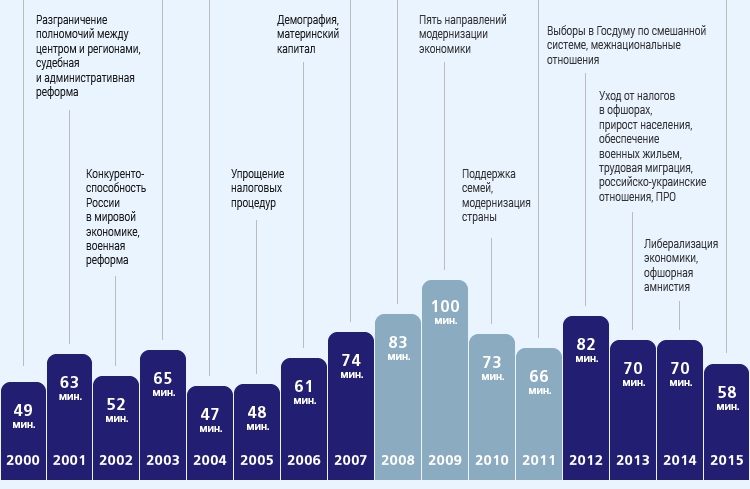 The length of messages of the President of the Russian Federation

The length of messages of the President to the Federal Assembly, the main topics of the presentations. Infographics