Political analysts, commenting on the President’s address, noted that the main topics of the presentations were the consolidation of society in international relations and socio-economic policy of Russia. 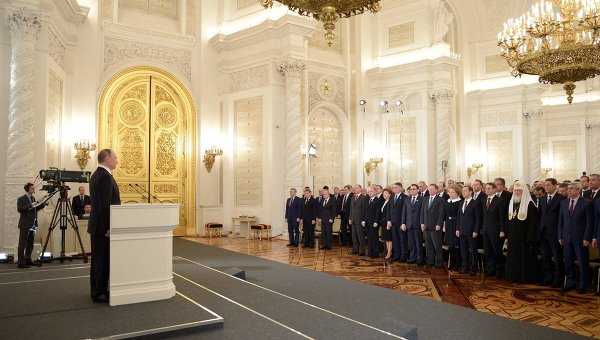 MOSCOW, 3 Dec. Political analysts following the annual message of the President of the Russian Federation Vladimir Putin to the Federal Assembly noted that the main areas this year were the consolidation of society in international relations and innovations in socio-economic policy of the country.

Russia’s President Vladimir Putin played on December 3 with the annual message to the Federal Assembly, which focused on issues relating to security and defence in the fight against international terrorism, the topic of Russia’s economic development and social support of its citizens.

Political scientist Dmitry Badovsky considered it important that, even amid the complicated economic situation, the President fixes the conservation priorities of social demographic policy. According to him, this once again is to show that the strategic task of the country — the preservation of its capacity.

“In today’s letter was very broad and quite finely detailed set of priorities for socio-economic development and presents a set of corresponding new tools for its implementation”, — said Badovsky.

The leading expert of the Center for political conjuncture of Russia Dmitry Abzalov added that they were in fact the message was to provide tools for effective competitiveness of organizations and to remove additional pressure on the business community and the third sector.

“In domestic policy and in the economic segment, the government is looking for partners as easy as possible for them. We are talking about business and NGOs. And those and others will be able to actively participate in state orders, they will be given support, but on the condition that they will be really competitive in the performance of its obligations and will not use the situation to cash in on the difficult economic conjuncture”, — said Abzalov.

The CEO of the Center for political information Alexei Mukhin said that the return to the runway socio-economic problems due to the fact that they are now much more serious and require more attention than international.

“Ukraine at this stage is not a primary irritant externally, on the political track… from Turkey this whole situation is nothing more than a provocation, Montenegro is a very important country, and its accession to NATO will not allow you to implement some projects, it’s frustrating, but it is not fatal… but international terrorism is a real and immediate threat to Russia,” he explained.

The legitimacy and transparency of elections

Experts also not spared the attention and the topic of the upcoming parliamentary elections. So Abzalov noted that the President focused attention on the integrity of the elections and their legitimacy. According to him, the regional elections this year show that this is a base install, as the presidential administration and the governors, and “no one is pulling bad ratings for the ears”.

“Legitimacy and the overall approach is much more important than trying to hold on to unpopular politicians. Here the corner-stone will be delivered to the efficiency and legitimacy of the will, and, consequently, the transparency of the process”, — said Abzalov.

Badovsky, in turn, added that a critical challenge in the next year, when elections will be held in the state Duma, is the social consolidation, “to save is extremely important which absolute trust in the elections and their results. Overall, the resource that such a political unity of the people is the resource for the implementation of the development objectives of the country,” he explained.

According to Abzalov, the President’s message was very systematic, and, as expected, the main topic was the fight against terrorism and the issue of security. “The external threat and terrorist including require serious consolidation of society, both in the economy and the social sphere and in politics. While not putting at the forefront is uniformity, namely, the unity of goals and objectives”, — he explained.

Badovsky, however, believes that international politics in Putin’s speech has been given less attention than internal problems of the country.

“I believe that this message is more focused on security issues in international politics, but, in my opinion, the President quite rightly focused on the challenges of the country, because they are key because they form the basis and foundations,” he said.

Political scientist Mikhail Vinogradov believes that the message, on the one hand, was dictated by foreign accents. In his opinion, now there is some understanding of foreign policy vector, as a consequence emphasis was placed on the middle East, the Syrian and Turkish subject, but had not been referred to the United States and China.

“It has been demonstrated that foreign policy remains a priority in… about relations with the West remains intriguing, because, on the one hand, the degree of Western expectations was raised as quite serious, on the other, it is obvious that in society and in the elites accumulated fatigue from anti-Western confrontation,” — said Vinogradov.