MOSCOW, December 4. The state Duma intends to consider and adopt on Friday in the second and once in the third readings the reading of a bill providing for the charging of fees on Federal highways with trucks weighing over 12 tons, and reducing the penalties for its absence. 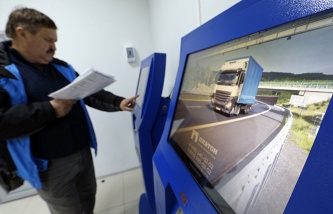 Deputies plan to make amendments to the law “On automobile roads and road activities in the Russian Federation” that reinforce the norm that “vehicles with permissible weight over 12 tons, on highways of General use of Federal importance shall be allowed subject to payment on account of compensation of harm caused by roads of such vehicles”. Such charge and order of its collection are established by the government of the Russian Federation, according to the draft.

At the same time it is expected the amendments to the Code of administrative offences (Cao RF), according to which the movement of heavy trucks without paying on Federal roads subject to a penalty imposed on truck drivers of foreign road carriers, as well as the Russian owners of heavy trucks, in the amount of 5 thousand rubles In case of repeated offence the fine will be doubled – up to 10 thousand rubles.

According to first Deputy Chairman of the Committee on constitutional legislation and state construction Vyacheslav Lysakov, the amendment is “a step forward towards the carriers.” “The sanctions are reduced repeatedly, with 500 thousand rubles – up to 5-10 thousand rubles,” he said. Lysakov also noted that the project introduces the concept of multiplication – not more than 1 penalty per day for any number of detecting a violation, and allowed post-payment instead of prepayment. “I am confident that this bill will be passed by the State Duma”, – he stressed.

Deputy Prime Minister Arkady Dvorkovich earlier told reporters that the bill, allowing to debug the implementation of the system “Platon” (the charging of heavy vehicles for travel on Federal highways – approx. ed.), willing and in the state Duma. “In the state Duma prepared the bill, which provides significant reduction in the level of fines in order to accompany the introduction of the system (“Plato” – approx. ed.) the workload was reasonable,” said the official.

System “Platon”, providing the toll for heavy vehicles with a permissible maximum weight exceeding 12 tonnes for travel on Federal highways is available from 15th November. Until March 1, 2016, trucks to pay 1,53 rubles per kilometer, in the future, the rate will increase. The funds collected by the vehicles coming to the Federal road Fund will be allocated as grants on the Federal and regional road projects, including those that are implemented on the PPP principles.