MOSCOW, December 4. Basmanny court of Moscow sanctioned the arrest of another participant in the riots on Bolotnaya square in may 2012.

“The court satisfied the petition of the investigation about the election in respect of Dmitry Bochenkova of a measure of restraint in form of detention for a period of two months, i.e. until 2 February,” reported the press Secretary of the court Anna Fadeeva.

He is charged with participation in mass riots and assaulting a police officer.

According to a source close to the investigation, Buchenkov in 2013-2014 “repeatedly went to Kiev to protest learning activities and communication with the radically-minded persons from other States”.

Arrested “is the informal leader of the leftist movement “Autonomous action” and editor of the newspaper “Moscow train”, said the source. Moreover, noted the Agency interlocutor, Buchenkov is a candidate of political science and associate Professor of the history of medicine, Russian national research medical University named after N. And. Pirogov.

Buchenkov was arrested on the evening of 2 December. He is charged with participation in mass riots and four counts of assault on police officer (part 2 of article 212 and part 1 of article 318 of the criminal code). His guilt he does not recognize.

What happened on Bolotnaya

The case about mass disorders on Bolotnaya square in Moscow was initiated after the events of 6 may 2012, when permitted by the authorities of the opposition rally turned into clashes with police. 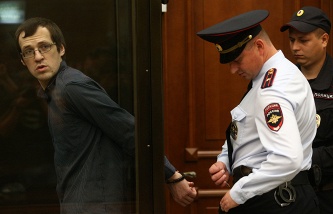 The ECHR has handed down its first decision on “Bolotnaya square case”, obliging Russia to pay €7 thousand

In total, the main so-called “Bolotnaya case” there were about 30 people. In some of them the criminal prosecution terminated as a result of the Amnesty declared to the 20 anniversary of the Constitution of the Russian Federation.