BELGRADE, 4 December. Russia and Serbia have always been allies, they remain and now. This was stated by Russian foreign Minister Sergey Lavrov at the meeting with Prime Minister of Serbia Alexandar Vucic. 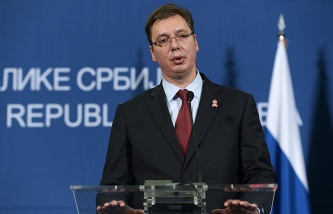 Serbian Prime Minister: suspension of the “Turkish stream” is expected, but need to find a new solution

“I will not speak long about our personal relations, they are based on spiritual closeness, solidarity, he said. We have always been allies in all difficult situations, in all wars. Allies and remain”.

The timing of Prime Minister Medvedev’s visit to Serbia agreed

The dates of the visit of the Prime Minister of Russia Dmitry Medvedev to Serbia are being worked out, said Lavrov.

“We appreciate the relationship that develops progressively, actively, on the basis of mutual benefit, respect of each other’s interests – Lavrov said following the meeting with Prime Minister of Serbia Alexandar Vucic. Course on the development of the partnership was confirmed and reinforced during the visit by Mr Vucic in the Russian Federation at the end of October of this year.”

“Now we negotiate terms of the visit of Prime Minister of Russia Dmitry Medvedev to Serbia, said the Minister. – Such an intensive political dialogue, contacts at the highest level is very, very useful for building the entire structure of our cooperation”.

“The relationship is not burdened by any political considerations, any attempt to introduce any restrictive measures. All this allows to intensify trade and economic cooperation”, – said the head of depodesta.