MOSCOW, December 4. The President of Russia Vladimir Putin got acquainted with the electronic textbook based on YotaPad. and civil version of the transmitter from the kit “Warrior”.

These developments at the meeting with the head of state was presented by the General Director of state Corporation “rostec” Sergey Chemezov.

“This is our production, our architecture, but components can be, of course, foreign. Mostly, or rather only, of South-East Asia”, – said Chemezov, showing the electronic textbook is created on the basis YotaPad.. 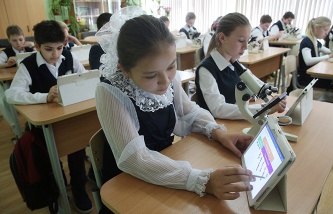 The head of Rostec told about color and black and white screens of the gadget, noting that “to write on it, to use as notebooks”.

“The textbook will not go out on the Internet”, – said Chemezov, explaining that the unit will operate within the framework server installed at a particular school, or as part of an urban network. “There are filled with certified textbooks, those textbooks that have passed examination and certification of the Ministry of education, these textbooks will work our children”, – said the head of the Corporation.

Chemezov drew attention to the importance of avoiding printed materials for students. “Children today are a huge number of textbooks: my son goes – 10 pounds, probably in his backpack, and one (textbook), can be notebooks, and all”, – concluded the head of Rostec.

He showed Putin the civil variant of the sensor used in modern military equipment “Ratnik”. Chemezov reminded that in the military version, the transmitter is mounted on the body, registers the condition of the body of a soldier, and all this information gets to the commander’s tablet. With GLONASS, you can also define the location of the soldier. 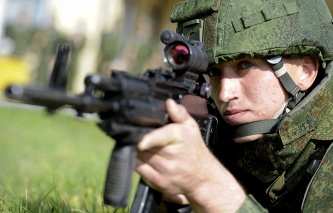 Chemezov: the decision to choose the AK-12 for equipment of the “Warrior” will be made in six months

“This thing, we said, what can be used for civilian purposes. It can (be used) in the form of hours. We are now booked in a more modern form of the product and will have to offer in the civil field, in particular for patients who, for example, was released from the hospital, and they are at home,” cited the example of Sergey Chemezov. He explained that in this way you can remotely remove ECG, to measure heart rate, to remind the patient about the necessity of medication, etc.

“In addition, if the patient begins a critical state… in 15 minutes the doctor can see the patient here a stroke. During this time he could send an ambulance. If the patient is ill, he presses a button and the signal goes either to relatives or to the hospital”, – said the head of Rostec. Also, in his opinion, such a device can be used to monitor the status of pilots in flight.

“Today we have in General the mortality from cardiovascular diseases ranks second, and this may contribute to the reduction of this indicator”, – said Sergey Chemezov.

He also told Putin that “rosteh” created encryption technology phone conversations for intelligence agencies and authorities, the population will sell it for 12-15 thousand rubles. “Today, this encoder we have produced for special services, for agencies of the Federal government. Then we jointly with the FSB will modify for commercial use”, – said Chemezov.

He explained that the encoder operates using the Yotaphone. “Connects via Bluetooth, typed on Yotaphone the number that you need, but on the other end must also be the same decoder, – explained the head of “Rosteh” the principle of operation of the device. And through a tube you can talk to. And the phone can be in the region of 10 meters, on your Desk, in your bag, in your pocket, anywhere.”

Chemezov added that now this device is being certified by the FSB. “Then, together with the FSB will modify for you and in Commerce, the free market, he said. – So, for example, competitors could not listen”. Putin asked how much will cost this device for customers. “In recalculation on roubles – 12-15 thousand”, – said the head of the Corporation. “Not cheap,” commented the President. Chemezov explained that this price is based on a small number of buyers. “If it will be massively, it will be cheaper, of course”, he said.

Also, the head of Rosteh showed the President of the state Corporation developed one of the smallest in the world of computers. “Secret documents can be upload here, it is protected from various sorts of viruses, – said Sergey Chemezov. – You can connect to any display up to the TV, you need only the mouse. If the screen is touchscreen, it is possible without a mouse and without a keyboard, and connects via wire and it works”. “Here’s a mini-computer, which power does not yield any large, overall”, he concluded.

Chemezov also told Putin that the consolidated revenue of Rostec for the year will amount to 1.2 trillion rubles. “In 2009, when we first made the consolidated financial statements for those enterprises that we received, our revenue was just over 500 billion rubles, loss – 61 billion, he said. – And this year we expect, estimated revenue, I think, will be 1.2 trillion roubles, and profit, I hope, will be somewhere around 40 billion. About 150 billion we pay various kinds of taxes.”

Chemezov noted that the average salary in the state is about 40 thousand rubles. “That is, the performance is quite good”, – said the head of Rostec. He added that at the Board meeting adopted a new strategy in the near future will consider the Supervisory Board. “According to this strategy, our Corporation has until 2025 to grow annually at 16% – 17%, – said Sergey Chemezov. By 2025, I hope we will take one of the ten largest corporations in the world”.