MOSCOW, 6 December. ALROSA, the world’s largest miners, in 2015 expects to receive net profit in the amount of 25 billion rubles, while revenue will fall by 32% compared with 2014. In an interview with corporate media reported the President of ALROSA Andrey Zharkov.

The President of the company noted that the dividend for 2015 will be paid in accordance with the dividend policy – not less than 35% of the profits. In 2016 it is planned to increase diamond production by 2-3% to 39 million carats. The company expects improvement in the diamond market in the second half of 2016 and is working on the creation of anti-crisis plan.

Based on data from the company by the end of 2014, revenue in the current year, in accordance with dynamics, announced Surkovym, may be about $3.4 billion Profit under Russian accounting standards for 2014 was 23.5 billion rubles, thus, in 2015, earnings can grow only by 6.4%. 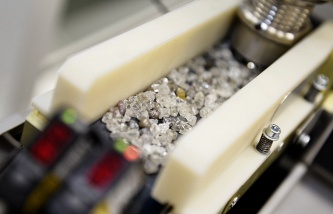 Net profit of “ALROSA” IFRS for 9 months increased by 2.5 times

During 2015, world diamond prices have fallen on average by 15%. In addition to the conjuncture of the diamond market on the company’s performance was influenced by macroeconomic factors, including inflation and exchange rates.

“Negative trends in General in the commodity markets had an impact, including on the diamond market, and directly affected the results of the company. I mean the company’s revenue, especially if we are talking about revenues, expressed in US dollars. It was reduced in comparison with 2014 more than 32%. However, it is still the financial performance of the company is quite stable. We plan to finish this year with net profit. Moreover, net profit, although it does not reach the target, above 2014. We expect to generate net profit in the amount of 25 billion roubles, it will allow us not only to fulfill all social obligations to employees of the company, but also to pay under our dividend policy, worthy dividends to our shareholders,” said Zharkov.

According to Zharkova, diamond production in 2015 will amount to more than 38 million carats, which is 5% more 2014. “Yes, unfortunately, we are unable to realize the entire amount, so part of it lies in our stocks. But it’s liquid reserves, which in the case of improving the situation on the market can instantly be turned into revenue,” said the President of ALROSA.

In 2016 ALROSA plans to increase production to 39 million carats. “The draft budget, which we today formed a it, however, has not considered by the Board, is scheduled to be done in the near future and then the budget must still be approved by the Supervisory Board, – but, nevertheless, in the draft budget, the production volumes are stored in accordance with the planned indicators, which are incorporated in a long-term program of development of the company. It is about 39 million carats. We have formed a budget because we expect that the situation in the diamond market next year should stabilize, and in the second half of next year we expect improvement,” said Zharkov.

“The company needs to consider possible development scenarios, including negative. In this part we are working on an anti-crisis plan. Would be weird if we pretend that nothing happens around us. This scenario is, it is primarily aimed at reducing costs. Yes, you can, and this is also accounted for in the anti-crisis plan, is, for example, the postponement of deposits, such as top-munskoe, or rescheduling of deadlines for the work planned for the tube dawn. Perhaps they can be related to the optimization of personnel, but very small. So far what we have laid in the draft budget for 2016, not due to the decrease in production volumes,” – said Zharkov. 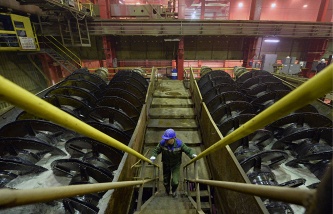 ALROSA’s revenues in the 1st half amounted to at least $2.1 billion

ALROSA is engaged in exploration, extraction, production and sale of diamonds. The company is diamond mining on the territory of the Republic of Sakha (Yakutia) and the Arkhangelsk region.

Investments ALROSA in 2013-2021 been planned to 256 billion roubles, with the increase in diamond production to more than 41 million carats per year.

The largest shareholders of ALROSA are the Russian Federation (44%), the Republic of Sakha (Yakutia) – 25%, uluses of Yakutia – 8%. The free float is 23% of the company’s shares.