More than fifty hotels in the resort of Sharm El-Sheikh were forced to close completely, some have sent the staff on unpaid leave. Affected and related industries, especially those supplied in hotels products. 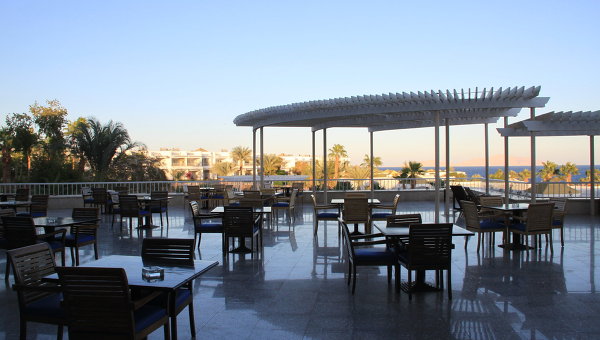 SHARM El-SHEIKH, 7 Dec. Raphael Daminov. The terminals of the airport of Sharm El-Sheikh a month ago just full of tourists, unusually empty today: panel of arrivals of international flights on the next day appear on only two flights from Kyiv and Kharkiv. After Britain and Russia, and then and other countries have suspended all flights to the Egyptian resort, Ukraine remained virtually the only one who continued massively to send their tourists here on a regular basis.

The largest in the history of Russian and Soviet aviation disaster occurred on 31 October: flying from Sharm El Sheikh to Petersburg A321 of airline “Kogalymavia” crashed in the Sinai, killing 224 people. The head of the FSB Alexander Bortnikov said that the cause of the crash was a terrorist attack. The flights of Russian aircraft in Egypt were suspended on 6 November. Later, the Federal air transport Agency sent a telegram banning from the November 14 flight EgyptAir in Russia

As an operations Manager for one of the largest Russian tour operators in the Egyptian direction Tez Tour Ahmed Fouad says that until recent events the company was receiving daily in Sharm El-Sheikh, 2-3 plane from Russia carrying over five hundred tourists. Now, he complains, only two jumbos for the whole week: from Ukraine and Belarus. Most of the staff of the branch — and it is a hundred and fifty people — leadership, according to Ahmed, “has been forced to send in paid leave prior to the resumption of flights”.

In the area of restaurants and swimming pools of five-star hotel, located in the beautiful Bay in Hadaba, you will notice only two or three campers. People visible only by the sea; this time of year the sun shines in Egypt especially soft, and you can sunbathe all day. Some tourists gathered at the beach bar, but if you had here traditionally there were long queues for the drinks (the hotel operates on an all-inclusive), it is now only a few young people.

The bartender AMR Egyptian city Menofia miss Russian tourists and asks, “when they again will be allowed to go to Egypt”.

“At home I have children and parents, I am the only breadwinner of the family. Will not be Russian tourists, no work, and I have to go back, and there is employment in big trouble,” says AMR.

Sales Manager at Ahmed Fathy shows a huge, empty hotel. According to him after the suspension of flights by Russian and British tourists in Sharm El-Sheikh hotel has lost 85% of its customers.

“We now have the occupancy rate in the hotel comes to a maximum of 25% of the total number of rooms. Basically it is citizens of Ukraine, very few Egyptians and tourists from Arab countries,” said Fathi.

But if this hotel still, but continues to work, more than fifty of the resort hotels from two hundred and thirty present at the Sharm El-Sheikh, unable to bear the loss of customers, were forced to close completely, and most of the remaining filled not more than 10%. Many hotel owners were forced to send staff on unpaid leave, and the remaining employees significantly lower wages.

At the moment all of the Sharm El-Sheikh according to the estimates of local hoteliers is about eight thousand foreign tourists, five of them from Ukraine. Several hundred tourists from several European countries, such as Italy, Switzerland, Germany, there is a small group of tourists from Georgia and individual tourists from Persian Gulf countries.

Among those who were out of work, and working in the field of tourism, the citizens of Russia. The Sharm El-Sheikh, a lot of them. Someone who entertains tourists on site, someone holds a high administrative position, and someone more recently quite successfully engaged in small business. Particularly affected are animators to entertain was almost certain. Many young girls and guys has already cut and sent home.

“The rest of us live in constant expectation that we’re going home, what we don’t want. I hope that our tourists will come back, and we will continue to work,” says animator Julia Belonogova from Yaroslavl.

The Governor of the province of South Sinai Khaled Food said that the main task of the city authorities now “to show the world that Sharm El-Sheikh, despite a temporary loss of the most part of tourists are not extinct and is once again ready to receive its guests.” For this power in the near future I plan to spend at the resort concerts and shows with participation of popular artists.

Also, according to him, already much has been done in the field of security at the airport resort.

“There were a lot of delegations from countries that have suspended flights to Sharm El-Sheikh. They checked the airport. We don’t mind. We tell them that we will take additional steps, those that they will tell us, as long as they returned to their tourists,” — said the Governor of South Sinai.

Many of the employees in the tourism sector deserted resort criticized the actions of the Egyptian government. Still, according to them, the authorities did not provide “a clear plan for the exit from the crisis”. Also, they believe, the government, in normal times just collects from the sales tax for hotels in Sharm El-Sheikh worth up to 400 million pounds a year ($50 million), in a difficult time had to support them and reduce taxes and pay the electricity, but nothing happened.

General Manager of a five star hotel, located in the Gulf of Shark’s Bay, Azmi Themselves comfortable with the situation, despite the fact that out of 526 rooms of his hotel, now only eighty are not empty. According to the top Manager, the Egyptian hoteliers already had a lot of experience in overcoming crises related to the suspension of flights of tourists: this was the first revolution that removed Hosni Mubarak in 2011, the same happened in 2013, when the military overthrew Mohammed Morsi.

“We have experience of how to survive such a period. What measures should be taken to minimize losses: to save on electricity, reduce coverage, send employees on vacation, and suppliers to ask to go to a meeting and give discounts up to 50%,” said Azmi Sami.

She says the hotel Manager, in addition to send on indefinite leave more than half of his staff, he had to limit the remaining in meat, chicken and fish. If these products comprised the daily diet of the staff, now they are served only three times a week.

In addition to various ways to save the majority of remaining afloat hotels are now looking for potential new markets. For example, the hotel representative who manages Themselves, has just moved to Lebanon, where he will try to make deals with local tour operators.

However, of course, a lot of hope in the Egyptian tourism sector lay to the early return of tourists from Russia. That they will return to Egypt, there even no doubt. In many ways, they say here, the red sea resorts apart from the competition: cheap, year-round sunshine and fly not so far. The only question that they often ask each other: “When will this happen?”. Now, after the suspension of sales of tours to Turkey, the local business hoping that the Russians will come back quicker and next summer they will be able to more than offset their losses.