MOSCOW, December 7. The Euro jumped 94 cents, to 75 rubles – the maximum level since 2 October. 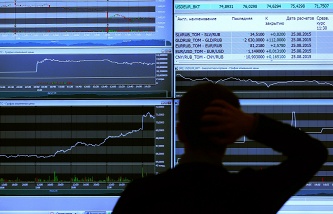 The RTS index fell below 800 points amid falling oil prices

The rouble fell following a drop in oil prices.

“The news that members of the OPEC decided not to cut production was the reason for the correction on commodity markets. A similar reduction in oil prices could not affect the attitude of members of the local foreign exchange market. It should be noted that the ruble at the time can enhance the sensitivity to oil prices”, – said the analyst of PSB Alexey Egorov.

“The main factor of influence on the course of trading is the dynamics of world oil prices. Volatility on oil futures rallied after an unexpected failure of OPEC to indicate a limit to the amount of extraction in the solution according to the results of regular meetings”, – says a leading analyst of investment group “OLMA” Anton Startsev.

According to the results of 168-th meeting in Vienna on 4 December, the Ministers of oil of the OPEC has not taken a clear decision on production quotas because of the position of countries that are not members of the organization. Currently the volume of oil production by OPEC countries is estimated to be 31-32 million barrels of oil per day.

As was stated by the oil Minister of Iraq Adel Abdel Mahdi, a decision on the quotas was not adopted because of the position of countries outside the cartel. In his opinion, to stabilize oil prices, all countries should set limits on production. Due to the lack of such restrictions, world oil prices fell to their current levels, stated the Minister of oil of Iraq.