SIMFEROPOL, December 8. The head of the Crimea Sergey Aksenov instructed to consider options for the supply of electricity on town-forming enterprises, idle since the cessation of supplies from Ukraine. 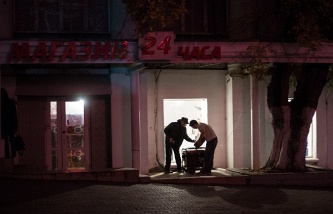 Ministry of energy: redundant power supply in the Crimea is returned to the reserve

Aksyonov: Crimea receives from Ukraine 160 MW of electricity, but residents want to abandon them

Media: among the participants of the energy blockade of the Crimea split

“Heads of administrations asking for a list of key, large enterprises to provide today the headquarters. The staff – to procure the immediate connection of these companies: either the allocation limits or scheduling”, – he said at the meeting of the interdepartmental Commission on liquidation of consequences of emergency situations related to the energy deficit.

So Aksenov responded to the report of the head of the Bakhchisaray district, in which he drew attention to the simple only in Crimea cement manufacturer. The request to resume the electricity supply to the “Bakhchisaray cement” was supported by the Chairman of the Crimean Parliament Vladimir Konstantinov.

“Cement in the Crimea, and if they don’t start producing, no one will work. Therefore, from any reserve better to give them (electricity – ed.), and then others,” he added.

The head of the Crimea reminded that December 15, the electricity supply will resume to all enterprises, as will be introduced the second strand of the power bridge from the Krasnodar region.

On November 22 due to the accident at the power lines in the Kherson region were fully discontinued the supply of electricity from Ukraine in Crimea. In the Republic introduced a state of emergency. To save on the Peninsula began to use rolling blackouts of consumers. On the evening of December 2, launched the first branch of the power bridge from Krasnodar region to Crimea, the Peninsula received from Russia an additional 200 MW of electricity.