ST. PETERSBURG, December 8. /Corr. Natalia Mikhalchenko/. After a year the halls of the first Museum in Russia – Kunstkamera will be interactive, and explore its collection can be controlled remotely from anywhere through the Internet. On it have informed on Tuesday to journalists the head of information technology Department of the Museum of anthropology and Ethnography RAS (the Kunstkamera. Peter The Great) Tatiana Bogomazov.

“Application for smartphones, through which you will be able to learn more about the exhibits by visiting and virtual tour of the Museum, which can be made from anywhere in the world via the Internet is already designed,” she said.

Next year the Museum will purchase and install the necessary equipment, in October will launch a pilot version of the project, in December next year he will earn completely. The transformation of the Kunstkammer in the interactive space and electronic encyclopedia is financed from extra-budgetary sources. “In 2015 and 2016, our investment in the project will amount to 7 million rubles”, – said General Director of the Charitable Vladimir Potanin Foundation Oksana Oracheva.

Why in the smartphone Museum 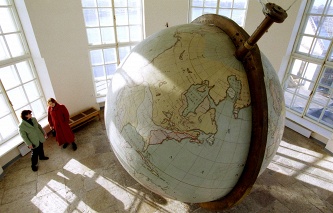 Project Manager for the creation of mobile apps for smartphones and a virtual tour guide for the Museum Irina Kopylova showed to the correspondent of TASS how it would work on the example of the showcases with the jewelry bead one of the African tribes. If you bring the phone app to the window, you will see icons with exhibits, clicking on which you can display on your smartphone screen, detailed text information about the purpose of the subject (in the case of jewelry it is either a protective amulet or decorative function), in what country, in what period of time what tribe he used and how he got to the Museum. In the display of information is pretty scarce – only a couple of lines. More or less detailed text explanations on special posters with only 2 of the 13 main exposition halls of the Museum.

The basis of mobile application – an electronic database of more than 200 thousand exhibits and the same number of images with detailed scientific explanations, which were created between 2005 and 2015. Mobile app and virtual tour guide are the only ways to deliver this material to a wide range of visitors of the Museum and its website. Before they go, all the fullness of information was available only to researchers.

Irina Kopylova said that in the halls of the Museum rooms display cases of the already duplicated electronic lights that have become the basic elements of the navigation system mobile app. Also on each window will place a QR code that contains text information about all the exhibits showcase. “In the future we plan to add a mobile app search bar and more customization options,” said Irina Kopylova. By checking and unchecking the checkboxes in the settings, the visitor can find what he is interested in, for instance, of cradles and cots for babies or Muslim headgear, nappies of moss among the peoples of the North, or female wedding suit of the Mughal dynasty. 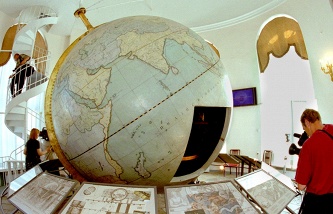 To create a virtual guide for each room was made about 70 panoramic photos. Some rooms, for example, located in the tower of the main building of the Kunstkamera, first opened to the public in the virtual space. For example, it will be possible to see the interior décor of the old globe, stored in the tower.

Both projects will significantly expand educational opportunities of the Museum as specialized publications and catalogues were available only to a narrow circle of specialists.

What has been done

The first step of the digital rebranding was a new website of “Cabinet of curiosities Y” , he earned Tuesday, a new logo and a new visual flow of the Museum, designed for a generation brought up on the Internet (1981-1995 year of birth). New logo – die dark turquoise – colored walls of a historic building Museum with peeking from beneath her old engraving of the same building. For thematic sections selected auxiliary color, echoing the natural dyes, which are also combined with old engravings exhibits and Museum displays.

“While rebranding we are fighting for the leisure of young residents of St. Petersburg and guests of the city”, – said Tatiana Bogomazov.

The Kunstkamera was established by Peter the Great in 1714. Originally it was a collection of curiosities brought from Holland, and exhibits from the personal collection of Peter. But with the development of research and scientific expeditions component took precedence, and the Museum has become a classic academic institution. The original historic building of the Museum – namely, it serves as a symbol of the Russian Academy of Sciences, was crowned with planetary (armillary) sphere, lost in 1747. Model of the Solar system, fabricated in CRISM “Pomata” returned to the spire of the building 28 January 1993. At present the Museum has only about 1% of the collection of Museum. That is why the creation of new information resources, it is essential to provide access to a wide audience to the unique collections of the Kunstkammer.