MOSCOW, December 8. The Chairman of the Federation Council Valentina Matvienko believes that the solution to the conflict between the truckers and Ministry of transport should be approached calmly and carefully, without presenting any ultimatums to each other.

“This (to resolve the conflict between the truckers who are unhappy with the toll for heavy vehicles, and the Ministry of transport) now must be done quietly, deliberately, not under the tramp of feet; to talk and find a compromise (solution) that would have made the state”, – said today the Senator in an interview to “Russian news service”. 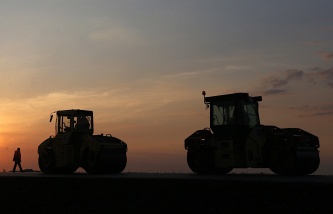 Matvienko acknowledged that solutions such as the introduction of “Plato,” we must accept “a more balanced, assessing the consequences for the same business for the same entrepreneur.” However, she has no doubt that completely free from all charges for use of roads is also impossible. “It must be understood that (if) to all exempt (from the fee), we will finish the road and then the second problem (the road) will never be resolved in Russia”, – said the speaker. In her opinion, to approach this issue is necessary, “can be more subtle and not so clumsy”.

The head of the Federation Council believes that in this situation, you should collect the actual carriers: how “ordinary men at the wheel” and large carriers, and “to find a balance of interests”. Thus, according to the parliamentarian, it is necessary to separate the real carriers, which protect your business from “politicians, which is already stuck to the truckers.” “If someone warms up (conflict), on this basis, his card playing, it is necessary flies from cutlets to separate, and the real representatives of business, private entrepreneurs to invite to talk and find a solution. But without ultimatums,” she said, stressing that the rig is “not extremists, but ordinary hardworking people”.

System “Platon”, providing the toll for heavy vehicles weighing more than 12 tonnes of tolls on Federal highways, are available from 15 November. Until March 1, 2016, trucks to pay 1,53 Euro for every kilometer, in the future, the rate will increase. During the first two weeks of working in the Federal budget and road Fund paid over 650 million rbl. it is Planned that in 2016 the collection of payments will bring 40 billion. The money will be spent on the repair of Federal highways.

Truck drivers from different regions have recently been carrying out protests against the charging of heavy vehicles and demand to enter the moratorium on action “Plato”. November 28, Minister of transport Maxim Sokolov held a meeting with the truck drivers. Following the conversation, he said that the abolition of the system “Platon” is impossible at the moment. But the government and deputies of the state Duma, said Sokolov, has already made compromise steps and lowered the corresponding payments.