ULAN-UDE, December 8. /Corr. Elvira Burganova/. Drinking bottled Baikal water, which is planned to export to China from Buryatia will be of average and premium.

About it reported in a press-service of the regional development Fund (RDF) of the Republic of Buryatia.

“The investor of this major project – “Beijing international trading company, “the Well of the Earth” – is going to take your brand to the leaders in the market of drinking water in China,” – noted in the Fund and added that the trademark is “the Well of the Earth” was registered in Chinese and English languages in 12 countries.

The agreement between the Chinese investor and the government of Buryatia on realization of project on production of bottled water on the territory of Buryatia, which will be extracted from the subsoil on the Bank of lake Baikal in the village of Vydrino, was signed this spring.

In RDF stressed that the production will not cause any harm to the nature. “According to scientists, without damage to the ecosystem of the lake can produce up to 400 million tons of water a year – that is 0.5% of the expenditure part of the water balance of lakes”, – explained in RDFS. 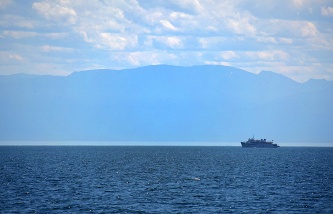 Irkutsk state University: lack of water in Baikal will last until 2020

Previously the CEO of RDF Anatoly Dumnov told journalists that “the diversion of water will in no way threaten her level of Baikal”. He noted that this project has passed all coordination at the Federal level, the Federal Agency for water resources allocated to water production up to 3.5 million cubic meters.

Today in the framework of implementation of investment projects already decided for the land, developed approaches for the construction of engineering objects. Work has begun on the design of intake and production halls. The issues with the power supply, the construction of the railway line for the shipment of products for export to China.

The entire project is estimated at 1.6 billion rubles. To work at the enterprise will be about 500 people, 70% of staff will be local residents. All the goods are planned to be produced for export.