MOSCOW, December 8. In Moscow condemn the actions of the Turkish authorities against the members of the crew of the program “Special correspondent” of the TV channel “Russia 1”. This was stated on Tuesday the Russian foreign Ministry.

“December 7, members of the crew of the program “Special correspondent” of the TV channel “Russia-1″ were detained in the border with Syria, Hatay province in Southeast Turkey at the time when they went to the neighboring province of Gaziantep, – informed the Russian dipvedomstva. – The arrest was made by unknown persons, dressed in civilian clothes, which to the legal requirement of journalists refused to identify himself and to produce documents”. 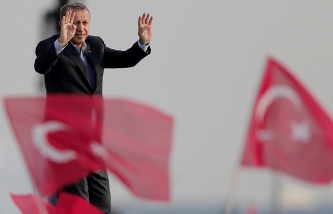 Bundestag Deputy: erdoğan takes the role of the godfather of terrorists

The Russian crew then brought to the police station, “where he announced the decision to deport them from Turkey on the basis of, as stated, “violations of rules of work of foreign journalists in the Turkish Republic”. “The Turkish authorities refused to give an explanation to the representatives of the Russian Embassy in Turkey, came into contact with the crew shortly after its detention”, – stated in the Russian Ministry.

“We strongly condemn illegal actions of the Turkish authorities, said the Russian foreign Ministry. – This attitude to the media is absolutely unacceptable”.

The Ministry also asked the question of what “rules” have been violated by the Russian journalists. “One gets the impression that Ankara was afraid of opening the correspondent of TV channel “Russia 1″ inconvenient for the government, facts about undertaken in the area by the Turkish-Syrian border illegal activities,” suggested in depodesta.

The Russian foreign Ministry indicated that the following incident is revealing in the light of a whole series of violations in Turkey of the rights of local and foreign media. “International organizations, including the OSCE, have repeatedly drawn this to the attention of the world community. Indicative in this sense, the fact of detention in late November, chief editor of the Turkish newspaper “Cumhuriyet” Jana Dundara and the head office of this publication in Ankara Erdem Gul in connection with the publication of the article about the involvement of Turkish intelligence in the supply of weapons to militants in Syria. The journalists were charged with “espionage, disclosure of state secrets and terrorism”. They face life in prison,” reminded the Russian foreign Ministry.