MOSCOW, December 8. Moscow considers premature convening of the December 18 Ministerial meeting on Syria in new York. This was announced on Tuesday the official representative of the Russian foreign Ministry Maria Zakharova.

“In the last days in some mass media with reference to public statements of some foreign partners there were allegations that Russia allegedly changed its position on Syria, – said in comments. – In this connection I would like to clarify the attitude of the Russian approaches on Syria. They are known, are fundamental. We have not changed them and not going to change, but, on the contrary, intend to vigorously defend, including in the framework developed in Vienna in the format of “International support group of Syria” (MGPS) we think is the best and promising,” she said.

“Russia advocates that work MGPS was continued in an efficient manner, with reference to the actual establishment of an inter-Syrian political process – in accordance with the statement of the “Group”, adopted in Vienna on 14 November, noted the diplomat. – However given the way things are going, we consider it premature to Express readiness to convene the next meeting MGPS at the Ministerial level in new York on 18 December”.

“In order to persevere on the way of promote the Syrian settlement, MGPS, we strongly believe, needs to follow certain rules, – noted Zakharov. – First of all, strictly adhere to consensus when making decisions. This requires, above all, to ensure the presence of all participants without exception of “Vienna” at the meetings of the “Group”. Secondly, the decisions should be implemented. In this case, it refers to the expert coordination, coordinated by the Jordan list operating in Syria for terrorist groups and contributing to the efforts of the special envoy of the UN Secretary-General Staffan de Mistura and other parties to develop the broadest possible spectrum of representatives of the Syrian opposition negotiating platform and forming a representative of the delegation for negotiations with the government CAP, as required by the Geneva communiqué of 30 June 2012″.

According to Zakharova, “while it “homework,” which took participants MGPS, not made, to gather for the Ministerial meeting, would, in our view, counterproductive.” “This would mean to turn MGPS – working body to provide real assistance to Syrians in resolving the crisis in Syria – discussion in the club,” she said. 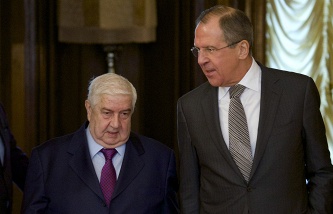 “Not having a collective view about who in Syria is terrorist and who is the opposition, not to talk about the inter-Syrian political process, about such an important and urgent issue of the ceasefire. Because it is clear that no negotiations and “reconciliation” with terrorists is impossible”, – said the representative of the Russian foreign Ministry.

“We don’t need “the meeting for the meeting”, and such an event, the results of which the parties could appeal to the UN Security Council with the initiative of making decisions meant to promote a political settlement in Syria on the principles of inter-Syrian national consensus in accordance with the letter and spirit of the Geneva communique,” – said Zakharov.