ST. PETERSBURG, December 8. The volume of freight traffic along the Northern sea route has increased in 2015 by 1.2 million tons and amounted to 5.1 mln t. these data were presented Tuesday at a meeting of the V international forum “Arctic: present and future” Deputy head, Federal state institution “Administration of the Northern sea route” Nikolai Monko. 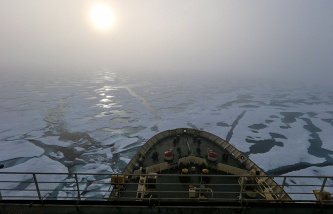 Rogozin: Russia has all the possibilities to make the Northern sea route year-round and all-season

“Ships this year have passed through the Northern sea route on several dozen more than in 2014, among them a Chinese court of planning to work on a permanent basis,” he told the TASS correspondent.

Sevmorput administration gave permission for the passage 697 vehicles, including 124 foreign. According to Monico, anti-sanctions have not affected cargo transportation.

“We have seen this year a reduction of transit via the Northern sea route, but this is not due to the deterioration of the work, and that has completed implementation of several major projects for which needed the transit in big volumes”, – he explained.

By the middle of 2016 it is planned to determine financial-economic model of development of the Northern sea route, which will determine its future up to 2030. Head of division Ministry for the development of the way Oleg Roy said at the forum that the technical specification for the preparation of the concept already formed, the end of the year it is planned to hold a competition and in January 2016 to sign the contract.

Roy noted that the development plan of the Northern sea route involves the Union of transport complexes of the Chukotka Autonomous district, Magadan region, Kamchatka and Primorsky Krai, and at the same time. Transit-transit point will be the port of Petropavlovsk-Kamchatsky. In the future, he added, planned to create an international trade route – it will include the Northern sea route, the Lena river, BAM, there will be outputs on the TRANS-Siberian railway.