According to analysts of the company “VTB Capital”, in the first quarter of 2016, the ruble may become stronger due to the traditional increase in this period. 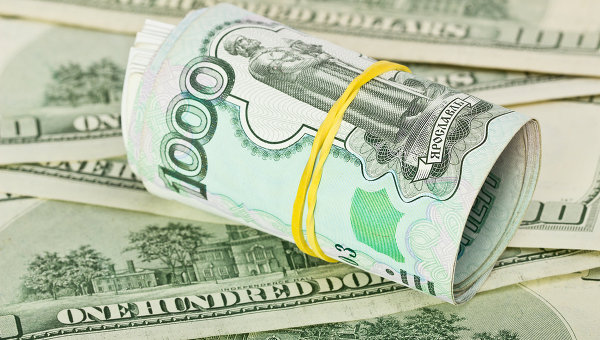 MOSCOW, 8 Dec. Elena Likova. The ruble is so synchronized with the cost of oil that only a strong movement of the price of “black gold” above $ 50 per barrel can strengthen the domestic currency above the current range, told reporters analysts of “VTB Capital”.

However, in the first quarter of 2016, the ruble may become stronger due to the traditional increase in this period, but by the end of the year, the dollar likely will be again to trade around 70 rubles, they suggest.

That supports the ruble

With the price of Urals crude oil at $ 35-40 per barrel, the dollar at the moment would have to be 70-72 of the ruble, says economist “VTB the Capital” Alexander Isakov.

“It is our fundamental assessment that includes the prognosis of foreign currency proceeds and repayment of foreign currency debt. But for several weeks we observed the picture which actually ruble is stronger than it would have to be based on the balance of payments,” he said.

This is connected with the optimism of outside investors, and that the share of external payments, net of repayments to be somewhat lower than you would have thought a few months ago, explains the expert. In particular, due to the fact that a number of domestic issuers entered foreign markets, resulting in a smaller net capital outflows, said Isaev.

With regard to current dynamics, according to a senior strategist of “VTB Capital” Maxim Korovin, the movement of the ruble is very well synchronized with what is happening in the oil market. If earlier it was possible to see that the ruble ahead of the trends in the oil market, now it is trading almost perfectly repeating oscillations of “black gold”, he says.

According to him, the forecast for 2016 should be based, primarily, on what will happen in the oil market, and in the second place on what will happen to the appetite of investors to risk in developing countries. “Most likely, the risk appetite of the developing countries will diminish amid increasing bets the U.S. Federal reserve,” added Korovin.

As noted by the head of Department of investment strategy “VTB the Capital” Alexey Zabotkin, analysts are of the opinion that with high probability the fed will raise rates by 25 b.p. (she is now 0-0,25%), and then take a pause, including on the basis of the upcoming elections in the United States of America.

Increase to 60 dollars per barrel

Last fall in the region of 40 dollars per barrel mark Brent, clearly linked to the OPEC meeting, says zabotkine.

“Because the participants have not agreed even about, in the final communiqué to insert a quota, in the next six months, the oil market will be left to himself. Also, an important detail is that the changing behavior of Saudi Arabia can be expected only after will become clear, the volume of oil that comes from Iran,” he commented.

Since the selling of Iranian oil will be clear in the second half of 2016, the rapid recovery of its cost now is not expected, the expert believes.

What to expect from the ruble in 2016

In the first quarter, the ruble will tend to strengthen as the current account in this period of the year the strongest ceteris paribus, draws the attention of Zabotkin.

If the prices for oil of mark Brent quickly recovers above the level of 50 dollars per barrel, in the second half of the year the ruble will be approximately at the current level or even weaker, for the reason that inflation of 7% in the Russian Federation is considerably higher than in developed countries, he said.

In addition, based on the rhetoric that we heard from the economic authorities in the last year, overall there is a preference to keep the ruble at levels that support low costs of domestic producers and the trend of import substitution, analysts say.

Not something to be undertaken targeted actions to the weakening of the ruble, but it is obvious that excessive strengthening of the ruble, the authorities will not help, he adds. “It was obvious in the summer when the dollar fell to 50-60 rubles, the Central Bank actively bought (currency – ed.),” he says.

According to Zabotkina, the goal of 500 billion dollars in reserves remained unchanged, although the rhetoric has softened a little compared to what was said in June, “Now this goal seems not very certain on the horizon, but in General, the accumulation of reserves means that the Central Bank ceteris paribus would tend to the ruble too strong was not,” he adds.

And if oil prices do not rise much over 50 dollars, by the end of 2016 we’ll bring the dollar to around 70 rubles, sums up Zabotkin.