MOSCOW, December 8. The Russian big landing ship (BDK) “Caesar Kunikov” on the deck which Turkey saw a sailor with a portable anti-aircraft missile system (MANPADS), have not violated any article of the Convention of Montreux.

This was announced on Tuesday the official representative of the Russian foreign Ministry Maria Zakharova. 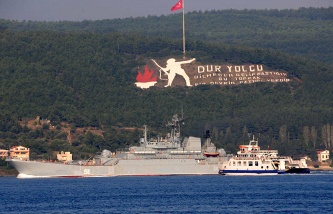 “December 4, during the passage of the Russian warship “Caesar Kunikov” of the Bosphorus Strait in the southern direction the Turkish party had noticed on the deck of a sailor with MANPADS, – said in comments. – The Ankara in this case is somehow interpreted as “provocative and threatening”.

“Our Ambassador in the Turkish foreign Ministry expressed “concern of the Turkish side”. According to Turkish diplomats, the local media alleged event caused a “wide indignant response,” – said Zakharov.

The representative of the Russian foreign Ministry drew attention that “photo armed with a heavy machine gun sentry on the deck of a Spanish warship in heavy area for some reason is no question the Turkish side and the media did not cause”.

“I want to emphasize that a Russian ship had not violated any article of the Montreux Convention of 1936 governing navigation in the Straits, and the provisions of the relevant Turkish regulations. Ship security is a legitimate right of any of the crew, – said Zakharov. – When our diplomats asked Turkish authorities, in what exactly she saw the violation, nothing intelligible except abstract references to a “context and philosophy of” international legal norms, we have not heard”.

From 5 may to 8 may 2015 visited Istanbul, where he represented the Russian Federation at the international exhibition of arms IDEF-2015.