Prime Minister of Russia Dmitry Medvedev gave an interview to leading TV channels of the country. In it he summed up the outgoing year and shared predictions for the future. 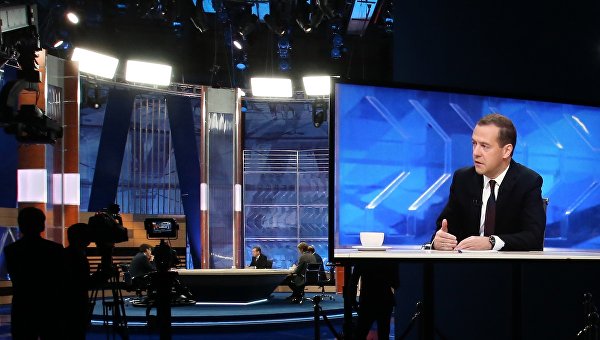 MOSCOW, 9 Dec –. Prime Minister Dmitry Medvedev held a live traditional meeting with journalists of five Russian TV channels. The questions, which were answered by the head of the government, rocked the foreign and domestic policy, economy and various measures taken by the Russian authorities in recent times.

Naturally, the question concerning the relations of Russia and Turkey, was one of the main in a conversation with Medvedev journalists. It and political sensitivities, and experiences of ordinary citizens.

Commenting on the attack of the Turkish side on the Russian military plane su-24, the Prime Minister said that Turkey actually gave reason for war, but the authorities of the Russian Federation did not respond.

“Of course, in the present life, in the current state, situation war is the worst that can be. That is why it was decided not to respond symmetrically to what was done by the Turks, and they, of course, violated all the norms of international law, did, in fact, an act of aggression against our country, given, as they say in international legal language, casus belli, that is the basis for the commencement of hostilities. The Russian leadership, the President, didn’t go for it”, — he noted.

“But we had to show them that they will answer for it. It is therefore in the interest of safety of our citizens these decisions were taken”, — said the head of government.

About swindlers and disgusting

The Ukrainian issue is mainly interested in the journalists in the context of a power outage in the Crimea and the prospects of repayment of Kiev’s debt in the amount of 3 billion euros.

To the latest Medvedev reacted with pessimism, condemning the Kiev authorities in the Scam.

“They say that hope dies last, but if you want my opinion, I have a feeling that will not return, because rogues. They refused to return the money, and our Western partners, we not only do not help but interfere in it,” he said.

As for the blackouts in the Crimea, Medvedev did not stint his determination in this case.

“Whatever may be said of the Ukrainian governors, what happened with the light is nothing short of a genocide. It’s quite boorish, is “freezed”, as they say, the position when the social institutions of the people, by the way, the Ukrainian government was revered for its own, saying “Yes our people there, and actually Crimea should return”, now they were cut off from the power supply,” — said the Russian Prime Minister in conversation with journalists.

“Well how is it called? Ugly just, differently not to call,” he added.

Such punishment, according to Medvedev, might incur the supporters of the limits of free medical aid in Russia.

“Holy, nobody attempts. Who will encroach on the hands will give in other parts of the body, — said Medvedev, responding to a question about the limits of free medical aid in Russia. – They (themselves – ed.) already have to go rightly for medical care”.

The guarantees of free health care needs “Holy respected,” he stated. “Where they’re trying to cut, it really is unacceptable and it requires the intervention of the authorities, I mean the Executive authorities and law enforcement agencies,” he said.

About the chicken laying the Golden eggs

Commenting on the possibility of introducing a progressive scale of tax on income of physical persons (NDFL), Medvedev said that he sees no reason to cut the goose that lays the Golden eggs.

“I think that 13% tax, which we introduced in 2000, is what we can be, managed at 100 percent. I mean, us as the power which exists since 2000… After upgrading to 13 percent of all taxes are paid: it is more profitable to pay than not to pay. Why would we want to cut the goose that lays the Golden eggs?” he said.

Good and bad guys of the government

It’s about them went into a conversation about the exhaustion of the Reserve Fund. In this connection the head of government noted that the task of the Ministry of Finance – to a certain extent, to escalate and dramatize. “Therefore, any Minister of Finance, whatever was his name, he is obliged always to dramatize the situation, they’re right,” said Medvedev.

“The task of the government, the task of competent government, and I believe that we have such a government, is to, on the one hand, the reserves to spend but on the other hand, to avoid the situation where we find ourselves with empty pockets. And here is the writing of Anton Siluanov. And frightening,” — said Medvedev.

“The government must be bad, and good guys. We all have pre-assigned roles, no doubt. Here I’m a nice guy”, — Medvedev said with a smile.

The fact that officials in Russia go on the more expensive cars than their counterparts abroad, this is wrong, is convinced Medvedev.

“Let’s face it: our officials are accustomed to go to the more expensive cars than do officials in other countries. I don’t think it’s right. If you have the income, buy a personal car and ride out his pleasure, but the state machine must be the normal middle class, but not exclusive line”, — said Medvedev.

Another unwarranted measure the head of the government considers the leave of civil servants, which is more than other workers.

“Look, we have public servants are resting more than other categories of the population, let us honestly say that we have a more hazardous job? The work is hard, but consider that there is any special specificity, and civil servants must rest, for example, more than other state employees, well I don’t see such specifics,” — said Medvedev.

“We decided to cut vacation, perhaps some of my fellow civil servants we thank you for it is not said, but in General this is true, I think it is right,” he said.