The economic crisis requires systemic changes in almost all sectors of socio-economic policy and public administration, said the head of Sberbank German Gref. 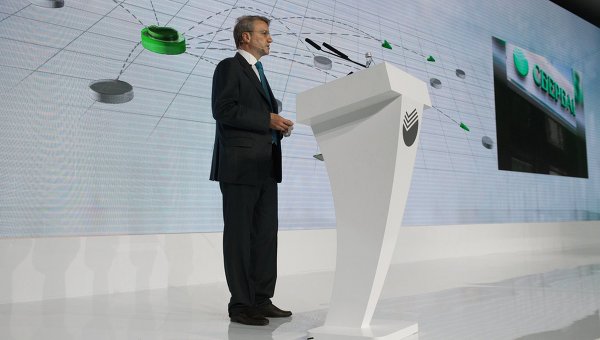 MOSCOW, 9 Dec. Russia’s economy plunged into recession, reasons for the growth in oil prices no, the country is in a systemic crisis and no reform of the public administration system it is pointless to start to deal with social and economic reforms, says the head of Sberbank German Gref.

According to him, the capacity of the old model of economic growth in the country was completely exhausted, and the situation is “qualitative degradation” of the economy.

“Two difficult years — 2014 and 2015 — which were very critical to our economy is behind us. The economy plunged into recession and has returned approximately to the level of 2011,” said Gref, speaking at the Federation Council.

Former economy Minister Gref began his address with a sketch in dark colours.

“Dramatically weakened the ruble and caused a currency crisis. We experienced a decrease in sovereign ratings… Sharply accelerated inflation and falling living standards — something that has not been the past 13 years, the annual drop in income accounted for more than 10% — this is the new reality we have to face both from the point of view of social processes from the point of view of influence on growth and capital outflow,” — said the head of the largest Russian Bank.

He recalled that the outflow of capital from Russia in 2014 amounted to 150 billion, which is “a very serious blow in including gold and currency reserves, which have decreased from last year by about a third”.

“The problem is, I think, is the quality degradation of the economy that is emerging,” he said.

Russia’s economy in 2016 will again face a recession, predicts Gref. “The main indicator that the state of the overall economy will degrade. Unless a new reversal from the point of view of reforms, we arrive at the conclusion that our economy will deteriorate,” — said the banker.

Gref also believes that the share of RF in world GDP will decline, which would reduce the geopolitical possibilities.

“I want to say that this crisis is different from all previous ones, which we have experienced in the last 15-20 years, one of its main feature — the crisis is not cyclical, the crisis system, and to outstay him will not succeed”, — said the head of Sberbank.

The current crisis, according to Gref, requires systemic changes in almost all sectors of socio-economic policy and public administration.

“Today, in my opinion, you cannot proceed to any socio-economic reform because the system of governance in our country is absolutely not ready to digest these reforms,” added Gref.

In his opinion, the basis on which underlies all reforms, is a reform of public administration. According to him, the last attempt to reform, including the introduction of charging for the trucks, shows just exactly that.

“When we came without proper preparation of this project when we did not appreciate all the consequences of the introduction when we evaluated step by step, how this project should be implemented when we conducted the experiment on introduction of the project at least on the territory of several subjects of Federation, we eventually got to the situation where today, this problem of technical-level one Agency developed into a problem, which will be now forced to do everything and the government will be forced to look for some exits of this situation,” he complained.

But any serious reform in modern Russian conditions is doomed to failure, said the head of Sberbank. “Today, in my opinion, the last thing you need to start doing is to start to make reforms,” he said.

The problem is that Russian managers are forced to deal with ongoing processes and reforms at the same time. The people that do well with your current processes, as a rule, very poor project managers, and Vice versa, said Gref.

“I was doing an extremely unpleasant task. The reforms I worked at night and on weekends. And did still a lot of mistakes,” said Gref, who in 2000-2007 post of Minister of economic development and trade of the Russian Federation.

Of a foreign state, he said, to reform special project offices. Russia, according to Gref, also need to come to a clear and adequate model of management reforms to create an appropriate structure, to prepare specialists. “We need to create two different modules, to separate these types of activities… not when you change to prevent the current processes suffer,” he said.

Gref also explained why he was in favour of liberalising the economy. “I don’t know a single non-liberal economy in the world, that is growing. All you can see today in China, it’s consistent liberalization of one market after another. As they have problems, the first thing they do is begin to liberalize the market. Today there is no country in the world that would grow and that would be illiberal, that is, non-free economy”, — said the head of Sberbank.