MOSCOW, December 9. Speech by Vice-President of the United States Joe Biden in Kiev indicates that Washington is interested in putting pressure on Russia through the maintenance of tensions in Ukraine. This was stated by Russian foreign Minister Sergei Lavrov in an interview with Italian media. 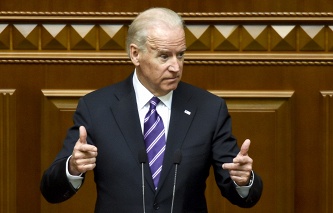 Biden said that the U.S. will never change its position on Crimea

“When there comes Joe Biden and in a propaganda stupor from the podium gets the people, declaring that we will not retreat from the need for Russia to fulfill all the requirements, and all applauded vigorously, I don’t think it’s contribution to solving Ukrainian crisis, – he said. – This shows that the US is interested to keep Ukraine in and not for the sake of Ukraine, and for Russia to exert pressure”.

According to the head of the Russian foreign Ministry, partners from Evrosouza and the US sure have found a good formula – the sanctions will be lifted only after Russia will fully comply with the Minsk agreements. “Read the Minsk agreements, – he advised. – There 99 percent of things that should make the Kiev government, and jointly with Donetsk and Lugansk”.

In confirmation of the Russian Minister referred to the Paris summit “channel four” during which the leaders of France, Germany, Russia and Ukraine within a few hours agreed on practical steps to implement the Minsk agreements.

“These steps are primarily in the fact that the Ukrainian government should enact the law on the special status of Donbass without any reservations, because now the law has been passed but suspended until elections are held”, – he reminded.

“As for the elections in the Donbass, said Lavrov, is here recorded in the Minsk agreements and is confirmed in Paris: the Ukrainian government should harmonize the election law with the Donbas, the Ukrainian government, or rather the President, must sign the already passed by Parliament a year ago, an Amnesty law, and the Ukrainian Verkhovna Rada should consolidate the special status of Donbass for three years, as provided for approved but not enacted law, and on an ongoing basis, as recorded in Minsk, and to do so in the framework of the Constitution”.

“And where is Russia’s role? I don’t see her”, – said the head of the Russian foreign Ministry.