MOSCOW, December 9. The Minister of foreign Affairs of the Russian Federation Sergey Lavrov has discussed with U.S. Secretary of state John Kerry prospects of the next meeting in Vienna format, on Syria. This was reported in the Russian foreign Ministry on Tuesday telephone conversation of Ministers.

The conversation took place on the initiative of the American side.

“The focus was on the Syrian issue, including the possibility of convening a new meeting of the International support group Syria (MGPS)”, – have informed in the Ministry. 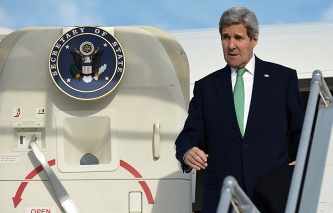 Peskov did not rule out that Putin will take U.S. Secretary of state

“Lavrov pointed out the necessity of preliminary implementation of 14 November about the formation of the delegation of the Patriotic opposition to participate in negotiations with the authorities of the country under the auspices of the United Nations’ lists of terrorist groups with which to talk about, and should act together to fight, said the Russian foreign Ministry. – It would open the way to the start of the process of political settlement of the conflict in Syria while the consolidation of efforts in countering radical forces”.

As said in depodesta, the Minister and the Secretary agreed that further promote the start of inter-Syrian political process should be maintained through the preservation of consensus between all participants of the International support group in Syria.

Lavrov and Kerry also discussed the schedule of bilateral contacts.

On Wednesday, foreign media reported about the intentions of Kerry to visit Moscow next week for talks on Syria and Ukraine. Thus a press-Secretary of Russian President Vladimir Putin, Dmitry Peskov did not rule out that the Kremlin may accept the Secretary of state.