MOSCOW, December 9. In Washington show the double standards, accusing Donald trump, who offered to deny Muslims entry to the U.S., but assuming the freedom of speech in the glorification of Nazism. This was stated by Russian foreign Minister Sergei Lavrov in an interview with Italian media. 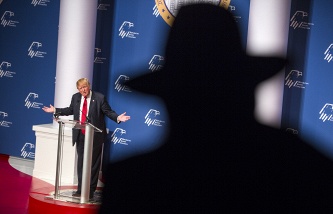 “As for the trump’s statements against Muslims, of course, we can’t support any discrimination on national, ethnic or religious grounds, said the Minister. – I would pay attention to another White house press Secretary Josh Ernest said that because trump said about the need not to let the United States of Muslims, he should immediately withdraw from running for President because the U.S. Constitution guarantees freedom of religion”.

“I have respect for the institution of the United States, but would like to cite another case, when several other findings do American officials from the text of its basic law, said Lavrov. – When the United States year after year voted against the resolution of the UN General Assembly on the inadmissibility of glorification of Nazism, they too, refer to their Constitution and say: “it’s freedom of speech”.

“Like if you take the similar logic when defending the right to freedom of religion (and absolutely rightly so), and under freedom of speech gives us the opportunity to glorify Nazism despite the fact that in the international Covenant on political and civil rights since 1965 recorded that freedom of expression should not be used for man-hating theories, insults the feelings of believers, undermine the security of the national institutions of the state, the double standards on the person”, – noted the Minister.