MOSCOW, December 9. Prime Minister of Russia on Wednesday will perform in the program “Conversation with Dmitry Medvedev”. The Prime Minister, by tradition, live, sum up the passing year and talk about plans for the future, answering questions of journalists in several Russian TV channels. 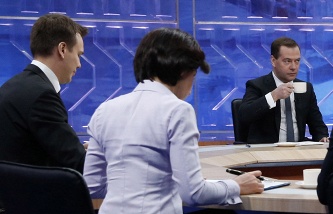 Conversation with Medvedev: in the same boat with the people

The other three interviewer was replaced. From NTV’s “Conversation with Dmitry Medvedev” this time will be conducted by Cyril Pozdnyakov (author and presenter, “Pozdnyakov”), from TV channel “the Rain” – author and presenter of the final analytical program Michael Fishman. Instead of the REN TV channel this year in the “Conversation” will engage the channel RBC TV, which will present the editor in chief Elizaveta Osetinskaya. Timakova said that RBC “is selected based on its economic specificity”.

“Estimated timeline live – an hour and a half,” said the spokesman. She also said that he expects “the most pressing economic issues – on fiscal policy, work in conditions of sanctions, plans for import substitution”.

For the first time Medvedev has used this format of the meeting on 24 December 2008, when he held the post of President of the Russian Federation.

Current communication with journalists live will become the eighth Medvedev.