MOSCOW, December 9. The vast majority of hauliers registered in the toll collection system “Plato”, is out on strike only a small part. Made during the introduction of bugs fixed and it needs to be brought to its logical end. This drew the attention of Prime Minister Dmitry Medvedev in an interview with Russian TV channels. 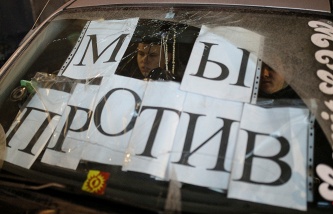 He stressed that “not all truckers are on strike”. “700 thousand truckers have registered in the system of payments (“Plato”), it is an absolute podavlyayushego the majority of those who perform long distance transportation,” he said. “I must admit, of course, any new payment nobody likes. But the vast majority of carriers – solid, large – which perform, by the way, 85-90% of all transportation within the country, already in this system are in,” said Medvedev. According to him, this will give you the opportunity to send in road funds of about 40-50 billion rubles, which is “not so little”.

Some carriers not registered “for various reasons”, said the Premier. “When we discussed this measure, and it is, incidentally, been discussed since 2011, it was clear that part of the transportation is “grey” unregistered carriers and who knows what they carry”, – noted Medvedev.

Of mistakes but they are “not fatal”

However, he stressed that made during the launch of the “Plato” technological bugs are fixed and reduced penalties. “Probably there were made some mistakes that had to be corrected. But they are not fatal, they are all fixed, it works,” – said Medvedev. 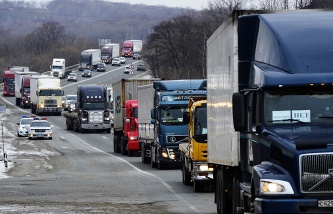 As for the psychological question, according to him, need to get used to that kind of transportation will have to pay. “All of this is included in the price of the product and ultimately the carriers themselves do not suffer from this”, – said the head of the Cabinet. He recalled that it was decided to reduce tariff for a certain period, and the amount of the fees was “negligible for the vast majority of cargo which is transported in such a transport.”

“Indeed, the fines, maybe, were somewhat overstated. But now, on the proposal of the government, the state Duma and the Federation Council their revised and lowered. Therefore, I believe that tweaking the system”, – the Prime Minister added, concluding that “Plato” will bring additional investment in roads. “We have a common place is to abuse the Russian roads. Money-where them to take?, the Prime Minister said. – Absolutely clearly, that to a greater extent all this is affected by the trucks, and they should all be involved. We must learn to pay for such services. Not always unpopular measures were well received, but ultimately, they bring important economic benefits”.