MOSCOW, December 9. Prime Minister Dmitry Medvedev considers it necessary to continue the development of system of declaring of incomes of officials. “I think it (evolution) is absolutely normal, and this work must continue both in terms of improving legislation, and in terms of what is happening, he said in an interview to Federal TV channels. In this sense, we still have a lot of work”. 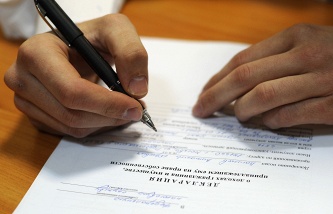 Sergei Ivanov: according to the results of verification of declarations 272 official dismissed “with the wolf ticket”

The Prime Minister recalled that in recent years the contingent of officials who served the Declaration and the declared information were expanded, were introduced prohibitions on the possession of a number of objects. The Prime Minister added that Russia has ratified several international conventions in this field. “We have anti-corruption legislation is quite modern, we got about 10 years ago simply was not”, – said the head of the Cabinet. “But this does not mean that we have changed the fight against corruption,” he said. According to Medvedev, corruption remains one of the most significant problems with which the state is obliged to fight.

Speaking about anti-corruption investigations, the Prime Minister expressed confidence that they “were, are and will be”. “But most importantly is that they are based on objective materials”, – concluded the head of government.

The Prime Minister warned the society against charges officials based on unverified publications, which are often ordered. He assured journalists that any data on offences of officials, particularly received public attention, are checked by the authorities.

“You said that a specific person was charged,” he said, answering a reporter’s question about the reaction to the publication of one of the funds, who accused the family members of the Prosecutor General of the Russian Federation Yuri Chaika dealings with the criminal community and the implementation of schemes business. “Look, if we’re in such a coordinate system is, we will go very far”, – said Medvedev. “Then you’ll be the best 30-ies”, – said the Prime Minister, referring to the period of 1930-ies, when the authorities practiced checks and arrests based on not always reliable and reasonable reports.

“The prosecution in our country can bring only the law enforcement system, only in accordance with the law,” he said. “And concerning all sorts of publications, you know, how they arise and how,” said the head of government. “This is not always the result of objective investigation, objective activities of any persons; it very often has custom-made character”, – said Medvedev.

“I’m not going to evaluate a specific publication, just to make it commercial, and that is the purpose this publication is to haunt,” – said Medvedev. “Moreover, it is always part of the political struggle,” he said. “Of course, if there is information (about the misconduct of officials – approx.), regulatory and enforcement authority is required to analyze and make decisions within the framework of existing procedures,” he said. “Not based on emotional reasons – “Wow! Who wrote! Well, let’s now all rolled up in asphalt!” – based on the specific case, based on a legal assessment of what it contains,” said he.

“Only in this case we can create a legal state, not the state, which we, unfortunately, for almost 80 years, when the presumption of innocence can be had in the shopping cart to throw”, – said Medvedev. “I would ask that and you meant it when you make that kind of conclusion,” he said to the journalists. “Public response is normal, it should follow legally verified, not the emotional reaction of the authorities”, – said the Prime Minister.

“If nobody says nothing, it does not mean that there is no reaction”, – said Medvedev. “The reaction should not be immediate”, he explained. “The authorities on any episode, in any case must analyze the totality of facts,” he said.

The Declaration on incomes of officials

Under current law, until April 1, Federal and regional officials and legislators are required to file information about their income, expenses, property and obligations of property character, as well as their spouses and minor children. Since 2013 for them, a ban on the ownership of Bank accounts, financial instruments abroad. However, they are allowed to have property abroad subject to its Declaration, regardless of the cost.

4 November the President of Russia Vladimir Putin signed a law that introduces an additional responsibility in the form of deprivation of office for the deputies of all levels, as well as senators and municipal officials for the lack of required by law the term of declarations of income and property.

The law tougher financial discipline for the deputies of all levels and municipal officials. Their duty was not only Declaration of income, expenses and property, but also information about the presence of conflict of interests and liquidation of foreign accounts. Because municipal deputies and officials of the rule on the liquidation of foreign accounts is introduced for the first time, they will be given 3 months from the date of entry into force of the law.