MOSCOW, December 9. The Federation Council approved a law authorizing the Constitutional court (CC) of the Russian Federation to recognize the enforceability of decisions of international courts, primarily the European court of human rights (ECHR), in case of their contradiction with the Russian Constitution. 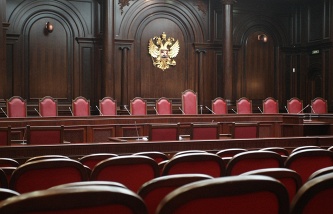 One of the initiators of the law was made by the head of the Federation Council Committee on constitutional legislation and state construction Andrey Klishas. According to him, “this is a law that is not intended to confer a right not to implement the decisions of Strasbourg or any other body, he aimed at the COP determined what enforcement mechanism, if it exists at all”.

The main purpose of the document, the Senator noted, is to withdraw the Federal government from “strange situation” when they make a decision about the possibility of execution of requirements of the international court of human rights, based on its understanding of their compliance with the Constitution of the Russian Federation. “At least it will be correct if the government will ask the appropriate question of the constitutional court, and he will determine, are we really in a situation where public decisions are contrary to the constitutional order, or not”, – said Klishas. He added that “the government now takes and interprets as he wants, international agreements and decisions of the courts, and the interpretation only applies to the jurisdiction of the court”.

In mid-July, the constitutional court considered the matter at the request of several members of Parliament and held that the decisions of the ECHR can be enforced in Russia only when they do not contradict the Basic law of the country. In the decision, the COP noted that in most cases there are no contradictions between the RF Constitution and the Convention on human rights. However, if a conflict arises, and the ECtHR will give the interpretation that contradicts the Basic law of the Russian Federation, Russia will be forced to abandon a literal enforcement of the decision of the ECHR. At the same time the court indicated that the legislator is entitled to establish special legal mechanism of ensuring the supremacy of the Constitution in disputed cases.

In February 1996, Russia signed the European Convention for the protection of human rights and fundamental freedoms, as well as a number of protocols. By ratifying these agreements, the country has accepted the jurisdiction of the European court of human rights (ECHR) and committed to fulfill its decisions. The relevant provisions were subsequently introduced in a number of laws and codes that did the ECtHR judgments the basis for revising earlier judgments.

The European court of human rights

Claims against Russia in the European court of human rights