The Minister of economic development will submit to the Parliament the forecast of development of the country. The Finance Department head will participate in the discussion of the Federal budget. 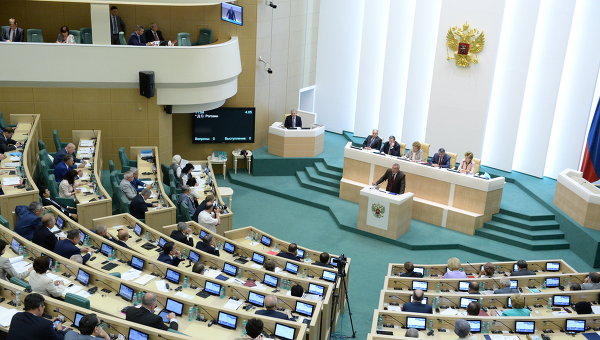 MOSCOW, 9 Dec. The Federation Council at plenary session on Wednesday will consider a Federal budget for 2016, the senators will be made by the Minister of economic development Alexei Ulyukayev and the head of “Sberbank of Russia” Herman Gref.

In the framework of the “governmental hour” the speaker will present to the Parliament the forecast of socio-economic development of the Russian Federation for 2016 and the planning period of 2017-2018.

Finance Minister Anton Siluanov will participate in the discussion of the Federal budget for next year. In accordance with the document, the volume of budget revenues in 2016 are planned in the amount 13,738 trillion rubles (17.5% of GDP), expenditure — 16,099 trillion rubles (20.5% of GDP). The budget deficit will be at 2.36 trillion rubles, or 3% of GDP.

The budget includes a planned rate of inflation in 2016 is not more than 6.4%, the average annual price for Urals oil at $50 a barrel. The budget recorded mandatory indexation of pensions at the level of 4% from 1 February 2016, provides for the right to make and pay for the second indexed by the results of the 1st half of the year. Maternity capital in the coming year will be 453,0 thousand.

The normative size of the Reserve Fund is planned in the amount of 5 trillion 507 billion rubles. The national welfare Fund at the beginning of the year will amount to 4.9 trillion rubles.

Senators also will consider the budget of the Pension Fund of the Russian Federation for 2016. According to the document in the pension Fund budget provides for an expenditure of indexation since February 1, 2016 insurance pensions, pensioners at 4%. Indexation of fixed payments to insurance pensions in 2016 will be made as from 1 February to 4%. The size of the fixed payment after indexing will be 4558,93 rubles per month, the cost of pension points – 74,27 rubles (in 2015 – RUB 71,41). The average insurance old-age pension in 2016 will be 13 132 thousand rubles, and the average size of social pension – 8 562 thousand rubles.

The costs of the Pension Fund on payment of pensions and allowances in 2016 is planned at the level of 6 trillion 539,1 billion. The amount of insurance contributions for compulsory pension insurance in 2016 is projected to be 4 trillion 060,35 billion.

In accordance with the amendments to the legislation, the indexation of salaries of civil servants, military and judges for 2016 will be suspended.

Speech of the Chairman of the Board of “Sberbank of Russia” Herman Gref planned as part of the “Time expert”.