MOSCOW, December 10. The mechanism of project financing Bank will be allowed to use to ensure the rights of participants of shared construction. 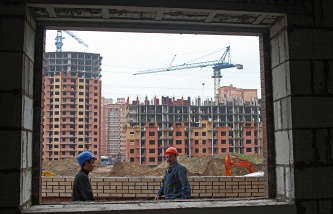 This was announced by Prime Minister Dmitry Medvedev at a government meeting.

“Another bill concerns the protection of participants of shared construction. To ensure the rights of participants of shared construction will be possible to use the mechanism of project financing Bank”, – said the Prime Minister. Medvedev explained that “the Bank gives the Builder credit for housing, it does, and money holders will be stored on special accounts in the Bank, to the developer they will go only after he finishes all the work and people will get their flats”.

“Let’s see how popular will this system work”, – said the head of government.

Media: the Ministry of construction has prepared an amendment on the obligation of shareholders to underwrite the risks of unfinished

He noted that the topic of shared construction difficult, “because the cases where people invest money and lying to them, unfortunately, are still widespread”. According to him, unscrupulous developers delay construction of the line, violate the agreement, the money is sometimes just disappear.

“It is also proposed to clarify a number of other powers, purposes, on which the developer can allocate funds of participants of share building, – concluded Medvedev. – It is proposed to allow to use this money for reimbursement of expenses for construction of objects of social infrastructure provided by projects in housing construction”.