The Russian foreign Ministry: the rhetoric of Georgian politicians prevents the improvement of relations between Russia and Georgia

Karasin: Russia is concerned about the intensification of NATO activity in the Caucasus region

“In the past day on the territory adjacent to the Georgian border, Russian military helicopters no flight was not performed. Not by chance the accusations of the representatives of the Georgian defense Ministry over the past day even approximately did not specify a place of violation of air space of Georgia”, – said on Thursday the head of the press service and information of the defense Ministry major General Igor Konashenkov.

He recommended that the Georgian colleagues, “before next time to make loud statements, to rely on objective monitoring data and, in particular, radar devices”.

The Georgian foreign Ministry that for the last days “of the Russian aircraft twice violated the country’s airspace”. In an official statement of the Georgian authorities stated that the violations took place in the evening of 9 December and the morning of 10 December.

“On 9 December at about 18:48 TB (17:48 GMT) Russian unmanned aerial vehicle from the occupied Tskhinvali region had violated Georgian airspace and flew over police posts that are located in controlled by the Central Georgian authorities villages of Cat and Gugutiantkari Gori district,” according to the Georgian foreign Ministry.

On Thursday morning, according to the foreign Ministry, “about 12:TB 48 (11:48 MSK) also from the Tskhinvali region Georgian airspace was violated by Russian helicopter Mi-8”. “The helicopter-the intruder flew over the building the police the Ministry of internal Affairs of Georgia, located in a controlled Central authorities of the Georgian village of Mereti, Gori district,” says Mead.

Moscow is concerned about the involvement of Georgia in NATO

Georgia’s involvement in NATO undermines multilateral efforts to stabilize the situation in Transcaucasia. This opinion was expressed by the Russian foreign Ministry on the results of the discussions on 8-9 December in Geneva. 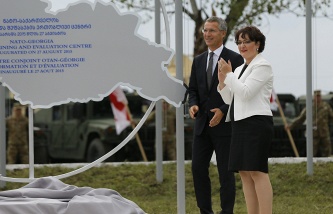 “At the meeting voiced concern about the deepening of military cooperation of Georgia with NATO, – said the Ministry. Accelerated involvement of Tbilisi into the Alliance undermines multilateral efforts to long-term stabilization of the situation in Transcaucasia, including the work of the Geneva discussions”.

Earlier, NATO Secretary General Jens Stoltenberg that Georgia and NATO are confidently moving towards each other. He also added that NATO “supports Atlantic aspirations of Georgia.”

“Georgia needs more progress in terms of reforms, in particular in the field of rule of law and the independence of the judiciary”, – said the Secretary General. According to him, “NATO will find a way to recognize the achievements of Georgia on reforms in the Ministerial meeting (of foreign Ministers) in December, and at the Warsaw summit (in 2016)”.