MOSCOW, December 10. The Russian government is not discussing a moratorium or the abolition of the system “Platon”. This was at the briefing told reporters Deputy Prime Minister Arkady Dvorkovich.

“I must say, we are not talking about what we will be discussing any moratorium or the abolition of this system. We should discuss what problems are faced by manufacturers, carriers, network, and find quick ways of their solution”, – said Deputy Prime Minister. 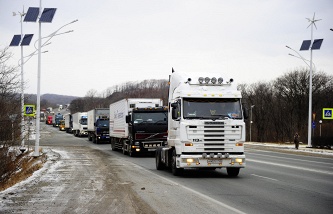 Medvedev recognizes that when the system starts “Plato” mistakes were made

According to Dvorkovich, the influence of “Plato” the price growth will not exceed tenths of a percent.

He noted that market participants complain about the expected price increase due to the introduction of “Plato”. “It is not. The effect of the introduction of the system on the price maybe, but it will be minimal, by all estimates, the vast majority of goods we are talking about tenths of a percent,” he said.

Dvorkovich noted that, in his opinion, “it looks like companies to justify any price increases for other reasons, the desire to increase in view of increased demand before the New year and tie it to the introduction of “Plato”.

Deputy Prime Minister added that he plans to discuss the situation with representatives of trading networks and carriers. “I hope that we will find common ground on this issue. And cases of unfair, unjustified price increases, will be monitored and investigated by the Antimonopoly service”, – said Dvorkovich.

According to Dvorkovich, the introduction of “Plato” works in favor of fair freight carriers, ensures transparency and eliminates illegal part of the market.

“The introduction of a system that provides transparency, traceability, and full payment of all fees, of course, works in favor of those who act in good faith, eliminates illegal part of the market and allows you to create a transparent, open, fair, competitive market for road transport”, he said.