MOSCOW, December 10. The introduction of tolls on Federal highways for heavy trucks and launching the system “Platon” from 15 November sparked protests for truck drivers in many regions of Russia, as well as fears of market participants about expected price growth.

In turn, the government is ready to discuss ways to exclude the negative impact of the new system on business but is not going to cancel “Plato” or to impose a moratorium on its use.

We should discuss what problems are faced by manufacturers, carriers, network, and find quick solutions to them

Why there will be a fee

According to the Ministry of transport of the Russian Federation, the share of vehicles weighing over 12 t is about 1.5 million units or 25% of the total number of commercial vehicles. According to experts, the most damage to the roads cause it is “heavyweights”. The decision to introduce fees from heavy vehicles is implemented in accordance with the Federal law that was passed by the State Duma in 2011

The discontent of drivers of heavy trucks

The emergence of the “Plato” truckers perceived negatively across the country, a wave of protests against the system. Carriers although not advocate the abolition of tolls on Federal highways require the postponement of its introduction. 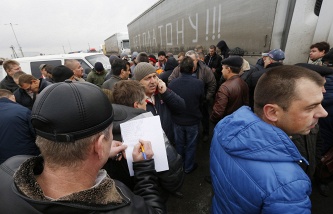 The drivers insisted on a test mode of the system the introduction of fees and the issuance of drivers equipment for the counting of kilometers, indicating the unavailability of the new system to work. The need for additional debugging of the system stated in the Ministry of economic development.

There are problems with the start of “Plato” and admitted the head of the government Dmitry Medvedev. The Prime Minister pointed out that mistakes at system startup, the tech bugs are fixed and it works.

According to Medvedev, the authorities have made steps to meet the drivers of heavy vehicles, softening the conditions of charging.

The influence of “Plato” in pictures

Trade associations of food producers and retailers, such as “Soyuzmoloko” and the HSE, stated that the introduction of fees with a 12-tinnikov will accelerate inflation to 2% projected by the Central Bank for next year to 5.5-6.5%.

According to the authorities, it is unlikely that the impact of the toll will be determining the overall dynamics of price growth.

According to the head of Sberbank German Gref, the contribution to inflation of the new road levy on heavy vehicles could reach 1.5%.

Meanwhile earlier the Deputy Minister of Finance of Russia Maxim Oreshkin said in an interview that the new road toll for the passage of heavy trucks on Federal highways will not lead to a surge of inflation in the Russian Federation and his contribution to the growth of consumer prices will amount to a maximum of 0.1% in 2016.

According to estimates by the Federal road Agency, the launch of “Plato” was reflected in increased prices for not more than 1%. The Department also indicated that the main portion of the transported on highways products – about 83% – building materials. The increase in food prices is projected at 0.3-0.4%, which is only a few cents. It is virtually painless for the consumer, indicated the Agency.

The concessions the authorities

Initially, the rate for trucks would be installed at the level of 3.73 per ruble per kilometer, but then the conditions were relaxed. According to signed by the government on 10 November the resolution to 29 February 2016 for one kilometre of travel on the Federal highway will be charged 1,53% before the end of 2018 – 3.06 ruble. It is expected that from 1 January 2019 the fee will be for heavy vehicles full – 3,73 rubles per 1 km.

On Friday, December 4, it became known, deputies of the state Duma promise to prevent the growth rate of 1.53 in the ruble for truckers after March 2016.

We will work with the government to March 1, 2016 “ruble fifty-three” did not go up. We need to look and see what are the costs and the amount increased goods transportation services

Evgeny Moskvichev
the head of the Duma Committee on transport

In addition, on December 4 to 100 times have been reduced fines for driving without pay. Penalties for non-payment of fees will be charged in Russia with may 1, 2016.

Out of the shadow

The vast majority of carriers, 700 thousand, was registered in the toll collection system “Plato”, is out on strike only a small part, pointed out Medvedev. Premier, registered – major reputable companies that perform 85-90% of all transport within the country.

According to estimates of the Prime Minister, after reduction of the tariff, the amount of the fees was “negligible for the vast majority of cargo which is transported in such a transport.”

As noted by Deputy Prime Minister Arkady Dvorkovich, the introduction of “Plato” works in favor of fair freight carriers, eliminating illegal part of the market. 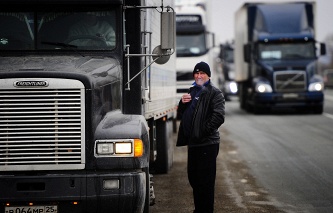 The discontent of the truckers by the introduction of a system of charging heavy vehicles associated with work in the grey area and the unwillingness to pay taxes, according to the Ministry of transport.

“It’s not really like that now, with this system will be almost complete alignment of all Supervisory authorities, fiscal authorities, as the extent to which and how many vehicles move on the roads of our country,” said the Minister Maxim Sokolov.

According to him, in establishing a system of charging heavy vehicles were taken into account international experience, the essence of which is that the destruction of roads is paid by those who can spoil them and earn on them.

Fee for the use of Federal highways for trucks, a practice common in many countries of the world.

Payment for the use of autobahns and other highways for trucks (Lastkraftwagen-Maut) introduced in January 2005 was Originally extended to trucks weighing more than 12 tonnes from 1 October 2015, the threshold was lowered to 7.5 T.

The cost depends on weight, number of axles and emission class of the vehicle. Average fee – 0,135 Euro per 1 km.

The fee for the use of highways was introduced in 2004, applies to trucks and buses weighing more than 3.5 tons the Price depends on weight, number of axles and emission class of the car – from 0,156 to 0,4431 Euro for 1 km.

Fee for the use of roads in General applies to all trucks weighing 3.5 tons the Price depends on the environmental class of the vehicle. Ranges from 0.031 inch to 0,0205 Swiss francs per tonne-kilometer. There is a separate fee for the entry of foreign trucks and other vehicles weighing more than 3.5 tonnes

Currently the systems-analogues “Plato” in France no. From 1 January 2015 it was planned to introduce a system of Ecotax, however, due to the protests of carriers, the deployment is canceled, the developer paid the penalty of 403 million euros. However, most highways in France are paid by themselves, the cost of travel for trucks is up to 0,35 Euro per km.