MOSCOW, December 10. The Ministry of agriculture, Federal customs service and Rospotrebnadzor asked to strengthen control over possible deliveries of re-export of Turkish vegetables and fruits through Kazakhstan and Azerbaijan. On Thursday the newspaper “Izvestia”.

The “appeal to the heads the heads of Federal agencies – Alexander Tkachev, Andrei Belianinov and Anna Popova, accordingly, have prepared the first Deputy Chairman of the Commission on the support of family, children and motherhood Public chamber (OP) Pavel Sychev,” reports the newspaper.

The appeal is in the order of publication, “Sychev indicates that they have information about Turkish suppliers search for ways of delivery of goods to Russia through these countries”, – said in the article.

“There is information that Turkish companies are actively seeking ways to maintain supplies to Russia to bypass the embargo. Suppliers of vegetables and fruits from Turkey are very difficult to find such a broad and effective markets, both in Russia. Kazakhstan, despite its expanding (for the Turks), a logistics arm, can be re-exporter – since it is closest to Turkey, the country of the EEU with open borders with Russia, with which both the state and business levels are maintained close relations. Also best partner for Turkish businesses could be Azerbaijan, with the country Turkey is also established by both state and business contacts”, – reported “Izvestia” the words Sychev. 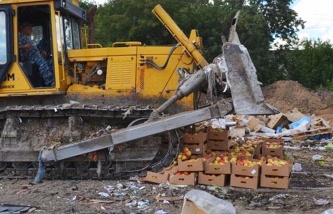 Rosselhoznadzor: the destruction of the Turkish products is possible only by order of the authorities

According to him, “with suppliers from Azerbaijan, thanks to the re-export of Turkish vegetables and fruits, will be able to expand its presence in the Russian market. Here, according to the expert, may use different schemes – from repacking and packing with subsequent delivery to Russia and transported with false certificates, as did nedoborovskyy Belarusian company-re-exporters,” reports the newspaper.