ST. PETERSBURG, 11 December. Turkish imports in the automotive industry of St. Petersburg is minor, but notable for the production, said the Chairman of the Committee on industrial policy and innovation Maxim meiksin city.

“Companies have a margin for a few days work”

“Turkish components occupy a small fraction in the products but have substantial role in the cooperation chain. Businesses have a margin of literally a few days work, so customs delays can stop production,” Meiksin said. According to him, Turkish components can be replaced by supplies from other countries, but it will take at least two months. Despite the fact that these details were not included in the sanctions list.

The head of the industrial Committee noted that the city authorities are in constant dialogue with the leadership of Federal customs service (FCS) of the Russian Federation, which promised in the near future to normalize the situation.

Earlier the office of Vice-Governor on economy Sergey Movchan said that he appealed to the Federal customs service of Russia with the request to solve the problem of Turkish supply of components for the automotive cluster and machine-building industry of the city. According to officials, enterprises and their suppliers drew the authorities ‘ attention to the fact that after the imposition of economic measures against Turkey has increased the turnaround time of goods coming from this country. Full inspection are the goods which are not included in the sanctions list of products. 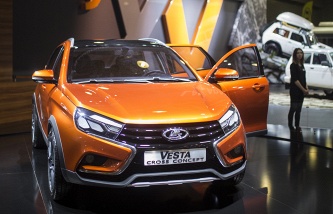 “AvtoVAZ” increase market share, while the Western car industry in Russia is experiencing a crisis

According to the analytical Agency “Auto-Dealer-SPb”, the factories of Hyundai , Nissan, Toyota and General Motors in St. Petersburg for January-September 2015 issued 222,8 thousand cars.

According to researchers, the Hyundai car plant in the first 9 months accounted for 74% of all manufactured cars in St. Petersburg. The company continues to increase its share at the expense of the conservation of the GM plant. At the same time, Toyota and Nissan accounted for about 20% of production cars.

In September, the factories of St. Petersburg were released 7 models of cars: Nissan Teana, Nissan X-Trail, Nissan Murano, Nissan Pathfinder, Toyota Camry, Hyundai Solaris and Kia Rio. In the first 9 months of 2015 4 of them are in the top 25 most popular cars in Russia (Solaris, Rio, Camry and X-Trail).