SAMARA, December 12. /Corr. Alexey Sokolov/. On the “AVTOVAZ” ready to start serial production of the new model – Lada XRAY was reported in the press center of the automobile. The car is already tested by Deputy Prime Minister Arkady Dvorkovich. According to him, the machine was good “and, above all, good for a driver.”

“The company has launched a countdown before the start of the new model – Lada XRAY. All ready to start serial production”, – noted in the press center. Serial production of the urban crossover will begin December 15. The end of the year in Togliatti it is planned to produce about 500 of Lada XRAY. The start of sales is scheduled for February 2016.

The crossover is cheaper than 600 thousand rubles

XRAY – high compact hatchback, made in the style of SUV’s. The car will be the second production model after the Lada Vesta, new brand “X”-style. XRAY created in the framework of cooperation of “AVTOVAZ” with the Alliance “Renault-Nissan”, the new products we developed over 500 original parts. The production model is organized on the most modern Assembly lines of AVTOVAZ – B0.

As stated earlier, the carmaker, this model along with Vesta should change the image of Lada in the Russian market and help to strengthen the position of the brand in major Russian cities.

Lada XRAY – the second major premiere of “AVTOVAZ” this year after the car Lada Vesta, the production of which began at the plant “IzhAvto” less than three months ago, on the 25th of September. In their new model of “AVTOVAZ” invested in 2015 about 30 billion rubles.

Exports to Germany and Italy 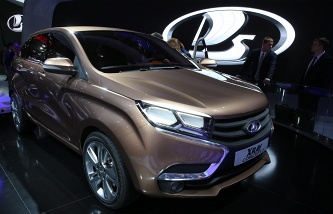 In particular, the machines will be updated firmware for electronic pedal, sensor mass air flow with a digital output signal, the controller of the electronic engine management system (EDMS). Also will be used with increased catalyst loading of precious metals.

While all cars Lada, produced for the domestic market, comply with environmental standard Euro-5. Version of cars “Lada Granta” and “Lada 4×4” for export, complies with the stricter requirements of Euro 6.

It is expected that the export of Lada Vesta and Lada XRAY “AVTOVAZ” will start in early 2016. This was reported by Vice-President of sales and marketing Denis Petrunin. In addition to the countries of the near abroad, where it is planned to deliver new models of Lada, are also considered Italy, Germany and the Middle East. “Where Euro-5, the export is planned to start in early 2016. In areas where Euro-6 be required to go through the certification process and increase the volume. There our product will appear later, but also in 2016,” said Petrunin.

Officials will change on Lada

The vast majority of officials in the Samara region will need to change to new models Lada Vesta and XRAY. About it on December 1 at a meeting with Russian President Vladimir Putin said the regional Governor Nikolai Merkushkin. 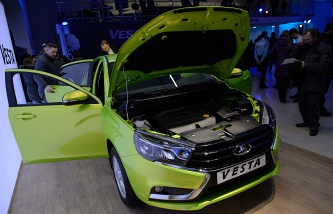 He thanked the President for his support and good response on the Lada Vesta. Putin has experienced this new model of “AVTOVAZ” in Sochi before the meeting of the Valdai club in late October. “Car is good”, – said the President of the Russian Federation. According to him, when it was tested in Europe, the test participants “could not determine the country of origin is called or one of the European countries or Japan”.

Merkushin said that the test participants evaluated the car in 12-28 thousand euros. He recalled that 15 December will be released another new Lada – XRAY, “is also a good machine”. “We get these two machines to replant 85 per cent of officials, all middle class, and even slightly above average. In the city of Samara mayor already goes”, – said the Governor.

December 2, during his visit to AVTOVAZ, Deputy Prime Minister Arkady Dvorkovich did on the “Lada of Exra” a few laps at the factory track. “A good car and, above all, good for the driver. Not sure how the passengers in the back, maybe a little tighter, but overall felt that this spacious car. Let’s see how sales will go. Let’s hope that the launch of Lada XRAY will be successful,” – said Dvorkovich after testing.