MOSCOW, December 14. Former Russian defense Minister Anatoly Serdyukov joined the Board of Directors of the holding “Russian Helicopters” (part of “rostec”), according to a press release from the company.

JSC “Helicopters of Russia” – one of the world’s leading helicopter industry, the only developer and manufacturer of helicopters in Russia. The holding was founded in 2007. The holding comprises five helicopter plants, two design bureaus, as well as enterprises for the production and maintenance of components, aircraft repair plants and service company providing after-sales support in Russia and abroad.

The official accusation of negligence to the former defense Minister was charged in December 2013. 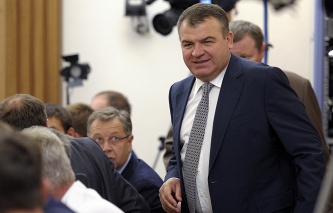 Serdyukov was appointed industrial Director of the aircraft in “assistance”

Guilt is not admitted. Serdyukov faces a sentence not connected with imprisonment. The ex-Minister was granted Amnesty in 2014, and the criminal case against him closed. The main military Prosecutor’s office confirmed that he was pardoned on legal grounds.

A parliamentary inquiry was not held

Deputies of the Communist party already tried three times to initiate against Serdyukov parliamentary inquiry. The first time they have made a submission to the state Duma in December 2013. The question was considered at session of the lower chamber 26 of February 2014, but then she did not give their consent, citing the fact that in respect of Serdyukov opened criminal proceedings.

Later, the Communists once again made the initiative of parliamentary investigation, however, on 14 January 2015 of the Duma profile Committee recommended to reject it.

September 25, 2015 deputies of the state Duma in the third time, did not support the initiative of Communists about the initiation of a parliamentary investigation into former defense Minister Anatoly Serdyukov.